At 4 a.m. Saturday morning I was soaked, not an inch of me dry, despite the wetsuit I was in.... 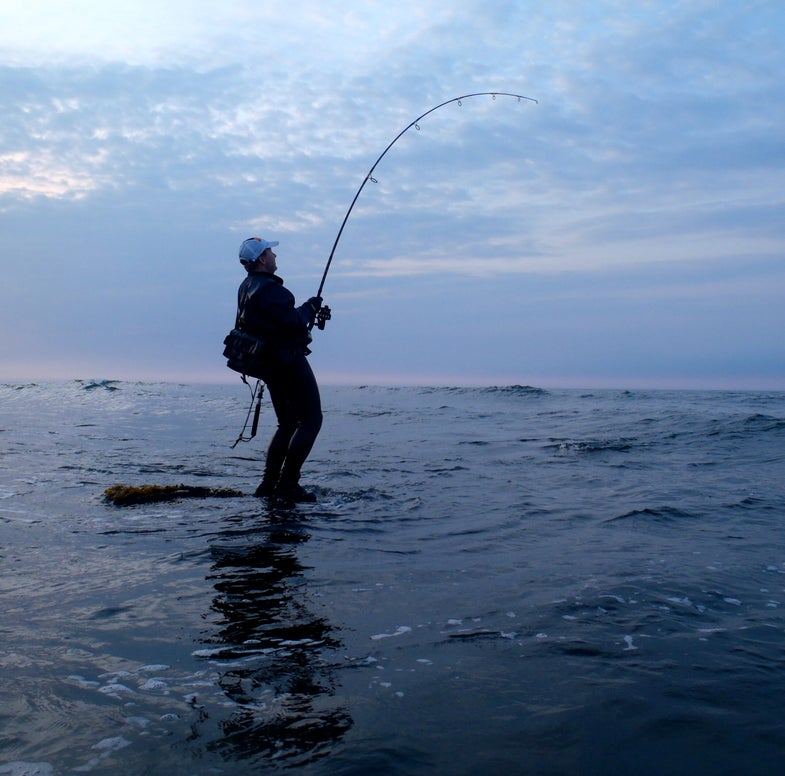 At 4 a.m. Saturday morning I was soaked, not an inch of me dry, despite the wetsuit I was in. I had swallowed so much saltwater that I was hoarse, and I had been fishing for six hours. I was ambling along the rocky shoreline of Montauk’s south side in the dark searching for any signs that the sun might be painting the horizon with the first shades of gray.

I was trying to keep up with Mike Coppola, one of Montauk’s better surfcasters. And Montauk is a place with a lot of great surfcasters. The place is drenched in legend and in June, it’s surrounded with the kind of stripers that can turn you from a “who’s he,” to a headline between sunset and sunrise.

I had spent minutes that seemed like hours trying to untangle wind knots in the dark. I had lost and reattached one of the removable studded soles on my boots three times. I was sore, I was tired, I was done.

Coppola is a wetsuiter. Simply put, he seals himself tightly in a neoprene suit from head to toe, waits until the sun goes down, swims to submerged rocks in the crashing Long Island surf, climbs on one, and targets stripers beyond the reach of other surfcasters. He gets knocked off, and he gets back on. He does this for hours on end.

Wet-suiting is undoubtedly a more effective means of reaching big fish in conditions like Montauk, where big stripers approach the shoreline under the cover of darkness to feed, but it was not for me, not at 4 a.m. anyway, I just want to go home. Mike wants to try one more spot so I tag along, dragging myself almost, to another boulder field down the shoreline. “This is nuts,” I’m thinking. “If we couldn’t find the big fish he was looking for a quarter mile back why would they be here?” I’m thinking we’re on a goose chase.

At 4:15 I’m thinking I might have a future as a wetsuiter. Mike has just dragged a 36-pound striper to the rocks, and is bombing casts to a breaking school of stripers beyond my casting range. From his perch in the surf, he is hooking up almost every cast with a school of blitzing bass. One fish pulls him into the rocks and breaks him off. He says it was bigger than the 36, and I believe him.

The night leaves me sore, exhausted, and wondering. Wondering when the fish warrant weathering the conditions. When is it too cold to ice-fish, too hot to chase tarpon or raining too hard to hit the water? How many times does it take, getting washed off a rock, before a 40 or even 50-pound striper isn’t enough to keep you on the beach. My answer seems to be: one more time. What do you think?