Oil Bearing Down on Alabama

The massive oil spill in the Gulf of Mexico has now been forecast to hit southeastern Mississippi and the Alabama... 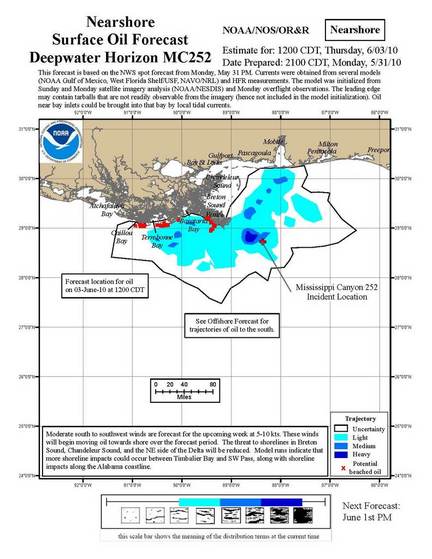 The massive oil spill in the Gulf of Mexico has now been forecast to hit southeastern Mississippi and the Alabama shoreline by Wednesday afternoon. Lastest National Oceanic and Atmospheric Administration forecast maps indicate that a light sheen of oil will completely cover the mouth of Mobile Bay and be ashore in Baldwin County by noon on Wednesday.

“The oil spill is moving in a northerly direction and now is approaching Mobile, Al,” says an un-named source. “Tomorrow the NMFS will change the closed area to the east.The north -south line will be moved from its present position to just a mile or so west of Orange Beach, Perdido Pass. From that north-south line west all Federal and state waters will be closed. So now almost all of La. and Ms. have total closures and a large portion of the Al. coast as well. The closure report that will come out by noon tomorrow on the NMFS web site.”

Meanwhile, BP’s latest plan to capture oil from a massive leak in the Gulf of Mexico might actually increase the flow of oil albeit temporarily.

Carol Browner, assistant to the president for energy and climate change policy, warned that when BP cuts off a leaking riser pipe in its latest plan to contain the oil leak there could be a temporary increase of up to 20 percent in the oil leaking into the Gulf.

She said the calculation was made by government scientists, whom she did not name.

The increase in the oil leak could occur between the time the pipe is severed and a containment dome can be lowered into place, Browner said.

Graham MacEwen, a BP spokesman, said Monday he did not know how much time would pass between the two steps.

Outdoor Life is headed to the Gulf and will provide frequent reports all week on Outdoorlife.com.