I can’t imagine having a fish puke a human body part on me but that’s exactly what happened to Humphrey... 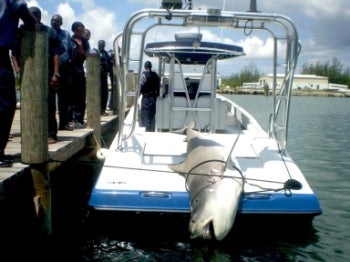 I can’t imagine having a fish puke a human body part on me but that’s exactly what happened to Humphrey Simmons this past weekend. Simmons and some friends were fishing in deep water roughly 38 miles from Nassau when Simmons hooked into the large shark. As Simmons wasn’t targeting sharks and didn’t particularly want to deal with one he asked his friend Stanley Bernard to get the boat’s shotgun. Bernard did and quickly put several rounds into the fish’s head when it surfaced.

The men then tied a rope around the shark’s tail and pulled it to the boat. Simmons explained, “We were going to cut the hook out of his mouth and let him go when he regurgitated a human foot — intact from the knee down.”

Upon seeing the foot Simmons tried to raise authorities on his VHF radio. After failing to reach anyone, the men decided to head to shore to contact the authorities in person. En route they encountered and quickly flagged down the Defence Force’s Enduring Friendship vessel. The shark was offloaded onto the Enduring Friendship and the two boats made their way to shore and the Coral Harbour base.

There, the shark was cut open to reveal a “black man, of heavy build and heavy structure. He had neither clothes nor any identifying marks.”

He also didn’t have a head!

Police believe the body could be that of any number of men who recently went missing at sea. They hope DNA samples taken from the headless victim will lead to some sort of identification. Given the state of the body, authorities believe the victim drown before he was eaten by the shark.

What a way to end a fishing trip!

Just a shark with a dead guy in it.