Despite hailing from a country that enjoys mushy peas, soccer, and Mr. Bean, British angler Wayne Little proved himself a... 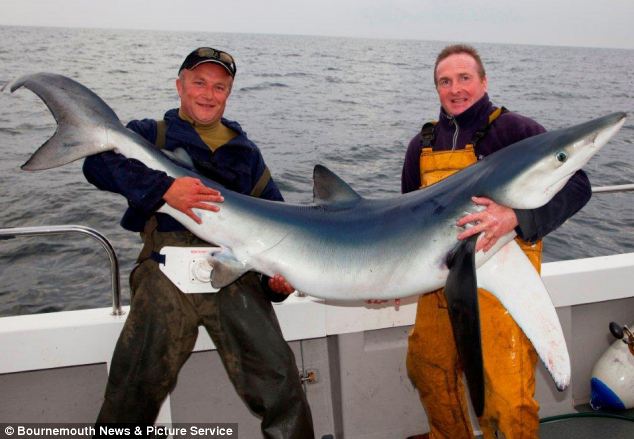 Despite hailing from a country that enjoys mushy peas, soccer, and Mr. Bean, British angler Wayne Little proved himself a man’s man this week when he landed what should be the Angling Trust’s new number-one blue shark; a monster of a fish measuring 8 feet in length and weighing an estimated 222 pounds. Little’s catch should be the new number one but due to an outdated and controversial rule that requires that the shark be “weighed [on shore] or bank” the fish probably won’t be.

“The days of fishermen killing a big sea fish and then dragging it up the quayside [on shore] onto scales just to claim a record are gone, you can’t do that anymore,” Little said. “The record authorities need to accept that and change the rules.”

Not only that, but they need to quit using words like “quayside.”
Little hooked the fish 20 miles off Milford Haven, Pembrokeshire on 400-pound test using mackerel as bait. “It was quite a gentle bite to start with but then it started messing around with the bait for a bit and I could feel then that it was going to be quite big,” Little detailed. “It took me 50 minutes to reel it in, it was really tiring and my knees were shaking by the end of it. It was a fair old lump.”

Yes, you read that correctly, Little referred to his monster shark as “a fair old lump.” In the United States a statement like that alone would keep him from any record.

Little estimated the blue’s weight using the widely recognized as accurate formula of measuring the length and girth of the shark to calculate its weight before releasing it unharmed. At 222 pounds, the shark beat the previous number one by more than 40 pounds; a record that’s been in place for 49 years.

So what do you think Outdoor Life readers? Should Little get his record? Would you ever refer to anything other than your mother-in-law as “a fair old lump?” Do you like mushy peas?