Tuesday evening, after returning from a party boat trip into the Pacific, I noticed that H&M Landing in San Diego... 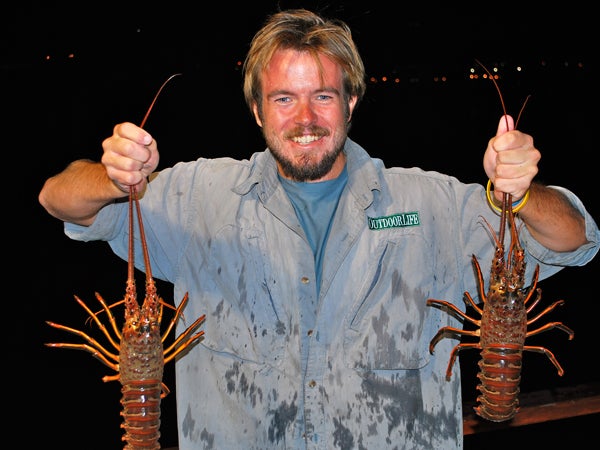 Tuesday evening, after returning from a party boat trip into the Pacific, I noticed that H&M Landing in San Diego offered something called “Lobster Hooping.” I had no idea what it entailed. I’ve been fortunate enough to do almost every type of fishing on this cross-country voyage, from fly-fishing small Vermont streams to battling 150-pound-plus sharks in the Florida Keys, to overnighters in the Northeast Canyons. Certainly, I thought, Lobster Hooping wasn’t “real fishing,” but I thought it might be a nice change of pace.

Along with my former Syracuse roommate and friend Curt, a University of San Diego Masters student, I boarded The Lobster Hooping boat at 7 p.m. The trips go from 7 until 1 a.m., to take advantage of prime lobstering hours.

“Lobster Hooping,” for the uninitiated, involves baiting a hoop-like cage with chunk bait like bonita, throwing it over with buoys affixed, waiting, and then picking it up and hoping legal-sized lobsters have wandered in.

The boat’s First Mate, Bruce, doubled as a cook, and between dropping the hoops, he threw burgers on the grill to complement the boat’s stash of ice-cold Coors Lights.

The trips are small, with a maximum capacity of 10 customers, and this one had six, including Curt and I. There was Kristyn, hoping to bring home some fresh lobster for her young boys and Ted, from the Pacific Northwest, who was kind enough to offer me a couch when I finally make it up to Washington.

I’d seen San Diego during the daylight hours, but at night the city skyline lit up and reflected in the water is something else entirely.

At the end of the night, Curt and I came away with three lobsters for the next day’s lunch, a few new friends, and a new appreciation for city’s aesthetic after sundown. Cold beer, big burgers, fellow fishermen and a beautiful setting left me wondering if a rod and real have anything to do with “real fishing.”