Since outdoorlife.com launched it’s weather page it seems the magazine’s editors have been cursed by Mother Nature. First Gerry Bethge... 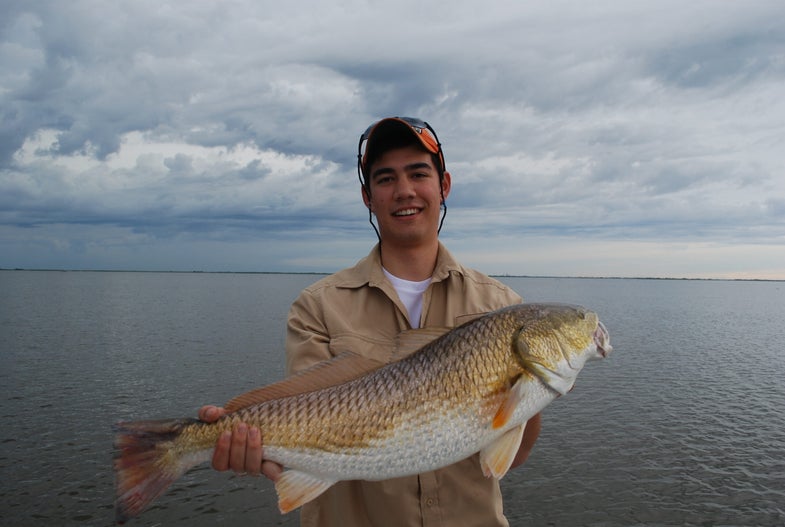 Since outdoorlife.com launched it’s weather page it seems the magazine’s editors have been cursed by Mother Nature. First Gerry Bethge had a tornado watch interrupt the middle of his deer hunt in Ohio. Then John Taranto and John Snow had blizzards during their mule deer and elk hunts in the west. Now it’s my turn.

The first morning of my two-day redfish trip in Louisiana was a beauty: warm sunny weather with a nice breeze. But as the day went on, a large storm system began to move in from the west and it was clear that our day of fishing would be cut short.

I was out with redfish pros Kris Culpepper and Jon Culpepper, a pair of brothers who fish hard and know how to find big bull reds. All day long everyone had caught nice fish except for me, and by 1 p.m. storm clouds started to roll in. Time was running out.

As if on cue, the fish activity spiked before the storm. Baitfish started popping everywhere and soon we were surrounded by tailing reds. To the pro angler, a redfish’s wake is about as obvious as a great white shark’s fin circling the boat, but to untrained eyes (like mine), a tailing red looks like nothing more than a ripple in a sea of ripples.

But finally one of these ripples hammered the Berkley Gulp I was pitching and after a fast and violent fight I brought in my first nice red with thunder clapping on the horizon. A short while later we booked it back to the launch just ahead of the rain and lighting.

Tomorrow only calls for scattered showers, and OL’s weather page tells me that I should be in for a “good” to “very good” day on the water. But with the smile still on my face from this nice red, I know tomorrow will be excellent.

Bring it on weather.

To see the weather forecast where you hunt and fish go to OL Weather.