You Are A Wimp Compared to The Villagers Of Tapilon

Sure, we’ve all thought about getting drunk and diving for super poisonous snakes. But the villagers of Tapilon actually do... 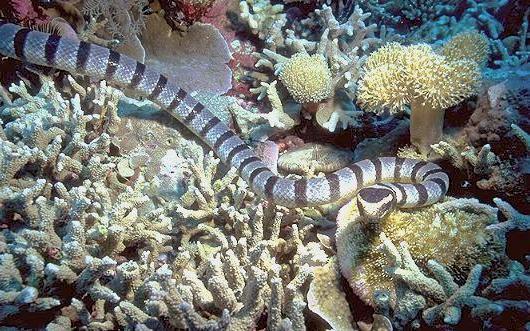 Sure, we’ve all thought about getting drunk and diving for super poisonous snakes. But the villagers of Tapilon actually do it. And compared to them, I’m a wimp.

Locally known as balingkasaws, the sea snakes off the coast Cebu Island in the Vasayan Sea grow longer than 4 feet in length and weigh more than 10 pounds. Its black and bluish-gray striped skin is highly prized by the leather market and its meat is considered a delicacy – Mmmmmmm, poisonous sea snake meat! In effort to profit from the abundance of snakes around them, the villagers of Tapilon have developed a unique night time hunting style.

Prior to hunting, the hunters consume great amounts of coconut wine with the belief that it thins the blood, making the snake’s venom less toxic. Then, donning goggles fashioned from wood, glass and old tire inner-tubes and with a Ziploc-encased flashlight in hand, the hunters explore the underwater caves for snakes. The snakes are caught and attached to the diver by slipping the head beneath a rubber band around the hunter’s wrist. A good diver can collect several snakes per dive.

Me, I tend to thin my blood with beer then do all I can to avoid snakes. But then again, I’m a wimp compared to the Tapilon snake divers.