Pictured here is a rainbow trout taken from The Lower Mountain Fork River in Broken Bow, Oklahoma. This is the... 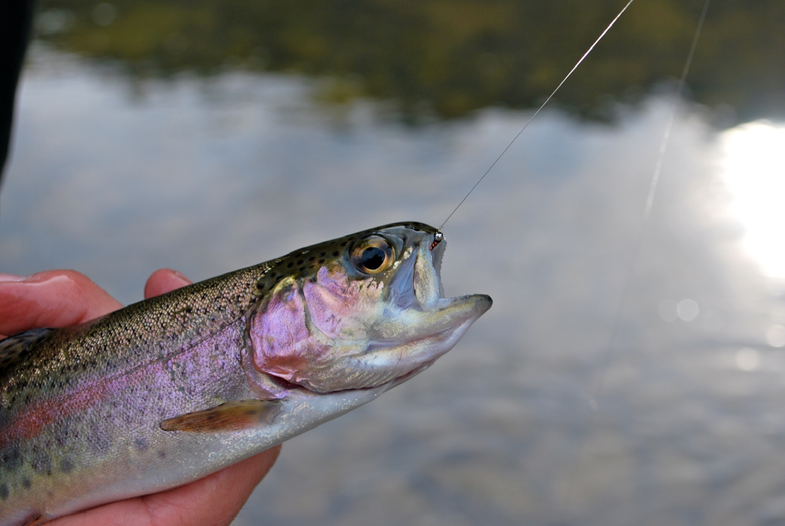 Pictured here is a rainbow trout taken from The Lower Mountain Fork River in Broken Bow, Oklahoma. This is the only fish I’ve got to show for the week. A cold front moving in had trout on the river scarce and selective. I’m hopeful a trip to the White River in Arkansas, some legendary trout water, will offer redemption.

One week, one rainbow; an abject failure right?

The rainbow was caught by Oklahoma guide Greg Dodds. Greg, a father, husband, airline mechanic and former strong safety on his base team in the Marine Corps, loves fly-fishing enough to get up at 4:30 a.m. to make the three-hour drive from his home in Broken Arrow to Broken Bow. He makes this trek because if it seems to you like Oklahoma is a state short on places to drift a dry, then you’re right.

I’ve set my cell phone alarm for pre-sunrise hours plenty of times on this trip, but I didn’t have to Saturday; Greg’s 3-pound Yorkshire terrier (who without a haircult looks like a streamer fly you might throw for muskies) stood patiently on my chest staring at my eyes until they opened, on the couch that Greg didn’t hesitate to offer.

Greg and I weren’t alone though, we were part of a convoy making the journey to Broken Bow. In all, seven members the Oklahoma Fly Fishers, a club of which Greg is the president, made the three-plus hour trek for trout. The club meets monthly and makes two annual trips to the White River for a week of “fly-tying, trout fishing, plenty of food and single malt scotch.” They are pictured here, in the midst of a mid-day strategy session to attempt to figure out the fish. Home made roasted peanuts, no-frills baloney sandwiches and a bag of mini-snickers provided food for thought, though the remainder of the day would prove equally challenging. The club had its Christmas banquet Friday night, and they were quick to pull up an extra chair for out-of-town fisherman. Salad, salmon and pecan pie might make for the best meal I’ve had on the trip, and I finally got to use the one collared shirt I brought.

A lack of light finally pushed us off the water Saturday, and after thanking Greg repeatedly, he and I went our separate ways. He went back to his family in Broken Arrow, and I made it as far as Hot Springs, Arkansas. I wound up talking with a local Arkansas guitarist, Steve, in a bar about Eric Clapton’s version of Little Wing, how Duane Allman inspired him to pick up a guitar, and walleye fishing in his home state of Michigan. After a shot of peppermint schnapps in honor of Christmas, electric guitars and walleyes, he said “I love the guitar, but I’m a fisherman first, I’ve been fishing my whole life,” showing me a photo of a 30-inch Arkansas walleye on his phone. I’d go back to see Steve rip through Midnight Rider on stage the next night.

Maybe it was the Schnapps, but for a second there, I forgot that it was a bad week of fishing.