We’re Gonna Need a Bigger Can

Why must almost every fishing piece I write about involve doing math? I mean, my degree’s in English. I took... 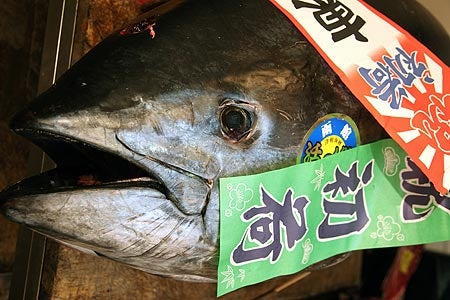 Why must almost every fishing piece I write about involve doing math? I mean, my degree’s in English. I took Geometry in high school twice … OK, three times. In college I took what was referred to as “checkbook math.” The class curriculum was designed to help students understand how to balance their finances. I’ll let my 20K plus VISA bill speak for how well I did in that course. Enough complaining on my part. Let’s look at the fish.

The first auction of the New Year at Tokyo’s Tsukiji fish market set a record when wholesalers purchased a giant bluefin tuna caught off the Japanese island of Hokkaido for a Godzilla size payout of Y32.5 million (Japanese Yen)! That’s an incredible Y20.3 million per kilogram! Or £743 per kilogram in whatever country “£” is a money symbol. In the U.S. that equates to about $396,000. The monster bluefin weighed in at 342 kg or around 754 pounds.

Although this monster is destined for upscale sushi restaurants in Japan (Yes, I’ll have the mercury McNuggets) it’s interesting to note that if this fish was intended for the supermarket shelf he would fill roughly 4,021 cans.

This catch comes at an interesting point in fishing regulations as last year conservationists tried but failed to ban bluefin trade by the Convention of the International Trade in Endangered Species of Wild Fauna and Flora. This defeat was primarily due to vigorous lobbying by the Japanese government. The separate conservation group, the International Union for Conservation of Nature did however list the Southern and Atlantic bluefin tuna as endangered species.

The biggest fish I’ve ever reeled in was only a few hundred pounds. I can’t imagine tackling something that weighs as much as one of those guys on the Discovery Channel that has to be cut out of his house.

What do you think Outdoor Life readers? Would you pay £743 per kilogram for a slab of raw bluefin? What’s the biggest fish you’ve ever landed? Comment below.