You Are a Wimp Compared to Adrian Sellick

Fifty-three-year-old Adrian Sellick of Somerset, England fishes the old fashion way. The way his family has for five generations –... 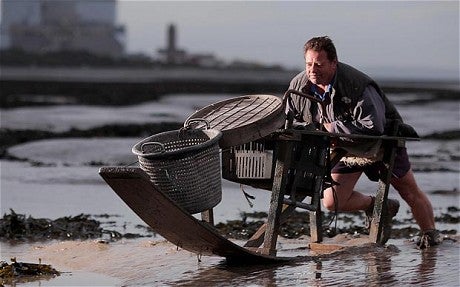 Fifty-three-year-old Adrian Sellick of Somerset, England fishes the old fashion way. The way his family has for five generations – by lying on his stomach before a wooden sled known as a “mud horse” and pushing it and himself across the mudflats to the open waters of Bridgwater Bay to set his nets for shrimp, cod, whiting, skate and sea bass. Once the nets are set, he belly pushes his wooden sled back to shore before making the arduous return trip to collect his catch.

No matter the weather or the temperature it’s all done by pushing himself through the mud on his belly. And yet as exciting and self-rewarding as this may sound, Sellick may be the last mud horse fisherman on the planet as his children have no interest in following in his footsteps … errr, belly trail.

Mud horse fishing was actually a way of life for many families in the bay area – generations ago. But progress in the form of a power plant built in the 1960’s severely slowed the activity. As Sellick explained to The Telegraph newspaper, “I have no problem catching fish but the power station drains all the shrimp resources. They use so much water that it pulls in the shrimps, diluting the stock.”

This depletion means less income for mud horse fishermen and ultimately the end of a way of life. “My four children couldn’t carve out a living this way and people prefer to have cleaner and better paid jobs now but hopefully in the future if shrimp numbers pick up my grandchildren might carry on.”

Given how difficult Sellick’s method of fishing is, I’m not sure money is the only factor keeping his children from their ancestral calling.

“It is difficult work, you lie on your belly on it and push with your feet across the beach… I was out there just last week and my hands were freezing but you can’t stop for a tea break, you have to work for as long as the tide will let you – usually for up to three hours at a time.”

As if this statement wasn’t enough to prove how tough Sellick is, he further added “I will do it as long as my health holds out, just like my dad did and his father before him. I think I will be going right up into my seventies like my father did. I still use it nearly every day…”

For fishing on your gut in the mud, Adrian Sellick you are more man than me. And compared to you, I am a wimp.