Day 1 of the Bassmasters Classic is in the books and although fan favorite Kevin Van Dam is most decidedly... 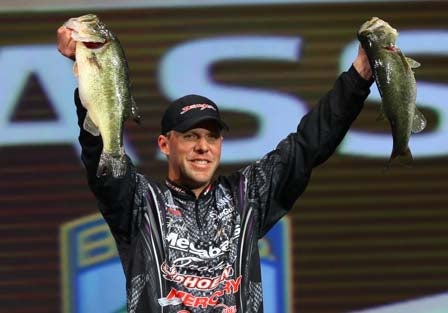 Day 1 of the Bassmasters Classic is in the books and although fan favorite Kevin Van Dam is most decidedly in the hunt for his fourth title, it was Aaron Martens of Leeds, Alabama who sits in the catbird seat with a total weight of 20 pounds, 7 ounces. He also took the largest fish of the day with a 5-pound, 9-ounce largemouth. Scott Rook is second in the standings at 19 pounds, 6 ounces and Van Dam is third at 19-3.

The first day of the Classic was all about the runners and the gunners and for at least one day, the gunners were sitting pretty. More than half of the tournament anglers took the more than two-hour run down the Mississippi south to Venice, Louisiana severely cutting into their fishing time. The leaders meanwhile stayed close and fished within sight of each other for most of the day. The key? As they later said in the leader’s press conference, they are fishing in the best spawning area on the Delta right now.

For now, it’s a dogfight, but everything can change in a hurry on Day 2.