The Native Gila Trout is Back

Call it a comeback, Arizona’s Gila trout fishing season has opened for the very first time. On Feb. 28, Flagstaff-native... 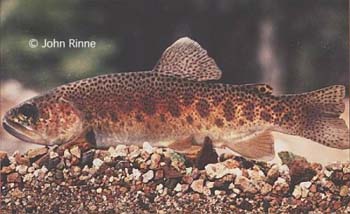 Call it a comeback, Arizona’s Gila trout fishing season has opened for the very first time.

On Feb. 28, Flagstaff-native Robert Woods caught a 19¼-inch, 3.35-pound Gila trout in Arizona’s Frye Mesa Reservoir. It was a landmark feat not only because its size makes it the standing state record, but also because it is the first-ever record for a Gila trout catch.

Never heard of the Gila trout? You’re not alone.

Listed as endangered under the Endangered Species Act in 1973, the Gila trout is a lesser-known cousin of the rainbow trout. Its population, once omnipresent to the rivers of the South West, nearly vanished from the waters due to overfishing, hybridization and habitat loss. In 1975, the population was estimated to be less than 7,600.

“Arizona has never had an open season on Gila trout,” Arizona Game and Fish Chief Kirk Young said in a press statement. “They were thought to have been extirpated from the state before we had regulated fishing seasons.”

But today, thanks impart to stream restoration and reintroduction efforts executed by a cohort of agencies, conservation groups and landowners, the Gila trout is growing in numbers and anglers are taking notice.

On Feb. 4, the Arizona Game and Fish Commission opened the season exclusively in the Mount Graham region.

The bag limit for Gila trout possession is a conservative one per person during the calendar year, and Game and Fish officials are encouraging catch-and-release methods because the fishery is still young and sensitive.

Despite these limited regulations, officials are optimistic about the growing population and what this means for fishing.

As Young says, “Angling history is seemingly being made each time we turn around. These are exciting times for anglers in Arizona.”