Mike Hoover, an Academy Award winning filmmaker, aims to show that great whites are far from the brutal killers some... 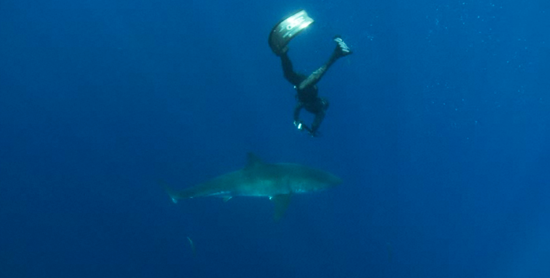 Mike Hoover, an Academy Award winning filmmaker, aims to show that great whites are far from the brutal killers some people think they are with his latest film “Great White Shark: Beyond the Cage of Fear.” According to the film’s distributer MODemay Entertainment, Hoover tried to debunk this myth about sharks by trying “to see the world through [the shark’s] eyes, to interact with them, touch them, maybe even form a relationship with the animal.”

One individual even swims with a shark while she’s dressed as a mermaid. Yes, she got in the water dressed as a fish to swim with a shark! I guess her sea lion outfit was at the cleaners otherwise I’m sure she would have worn that instead.

While the trailer does contain some amazing footage, I see nothing good coming from this project. Sharks are sharks. They are wild animals. They are not predictable and they don’t want to be your friend. Interacting with them is extremely dangerous to say the least. Swimming freely with them, riding on their backs, and caressing them is borderline suicidal. Showing footage of people doing this is irresponsible – it gives people the impression that none of the above matters.

It does. And somebody’s going to get killed. What are your thoughts Outdoor Life readers? Should people try to form this type of relationship with a wild animal?