Crew members aboard a South Africa research boat got a little more than they bargained for when a 1,000-pound Great... 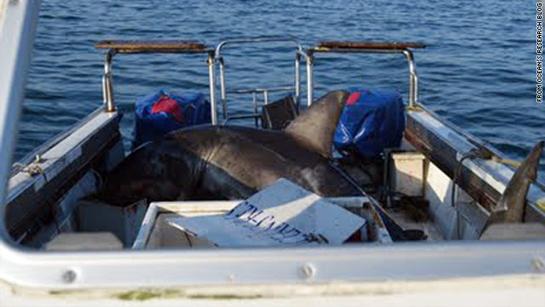 Crew members aboard a South Africa research boat got a little more than they bargained for when a 1,000-pound Great White shark jumped out of the ocean and into their vessel on Tuesday.

According to The Cape Times, the researchers for Mossel Bay-based Oceans Research were chumming the waters and collecting data off South Africa’s southern coast when the terrifying event occurred.

The six-person crew had little time to react when the hungry shark, enticed by the chum, leapt from the water and landed partially on their boat. One crew member was nearly crushed by the shark, but was moved out of harm’s way by other members of the crew.

The shark thrashed wildly and became stuck in the boat’s stern, destroying fuel lines in the process.

Dorien Schroder, one of the researchers, radioed colleagues Enrico Gennari and Ryan Johnson for help, and kept the shark’s gills wet for 15 minuets until help arrived.

Eventually the Great White was lowered back into the ocean with the help of a fishing boat that was equipped with a crane.