Angler Beats His Own World Record by Catching 2,649 Fish in 24 Hours

On Friday Jeff Kolodzinski beat the world record for the most fish caught in 24 hours by hauling in 2,649... 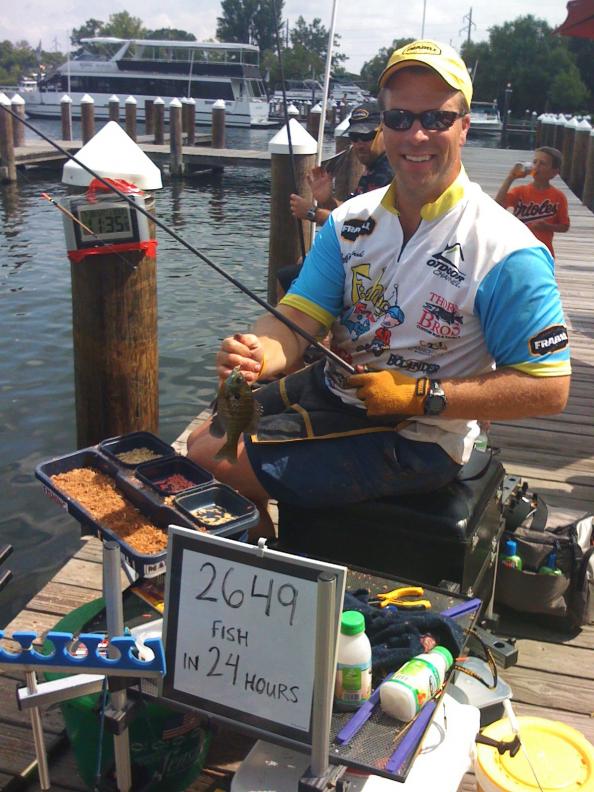 On Friday Jeff Kolodzinski beat the world record for the most fish caught in 24 hours by hauling in 2,649 panfish and bullheads.

Exactly what would posses a man to fish for 24 hours straight, hell-bent on catching (and releasing) as many tiny bluegills as humanely possible? Well, besides the fame and fortune that comes with such an illustrious record, Kolodzinski was out to support Fishing for Life, a nonprofit organization that helps urban youth through fundraising and fishing programs.

Sponsored by Frabill and Outdoor Channel, Kolodzinski was fishing in a competition that featured contestants from both companies. Kolodzinski, the VP of Marketing for Frabill, set his record from a dock on Lake Minnetonka in Minnesota. It was the same dock he fished last year when he set the then world record of 2,143 fish caught in a day.

Mitch Petrie, producer of “Wardens” on Outdoor Channel, fished near Kolodzinski on Lake Minnetonka and caught about 2,000 fish.

Just 20 hours into the day Kolodzinski beat his old record, meaning he managed to catch and release more than 500 fish in the final four hours.

“The Guinness Book of World Records [challenge] is most fish caught in 24 hours, so we went for the bluegills. They’re smaller – you can catch a bunch of those, as opposed to walleye, musky or pike. So almost all the fish that we caught were bluegills, a few bullheads and a few crappies, but that was really it,” Kolodzinski told Fox Twin Cities.

His tackle? Kolodzinski kept it simple with a fishing chair, a simple modern cane pole and a tray of live maggots.