For this week’s taste of PETA idiocy, we head to Florida… Saying that they hope it will make people rethink... 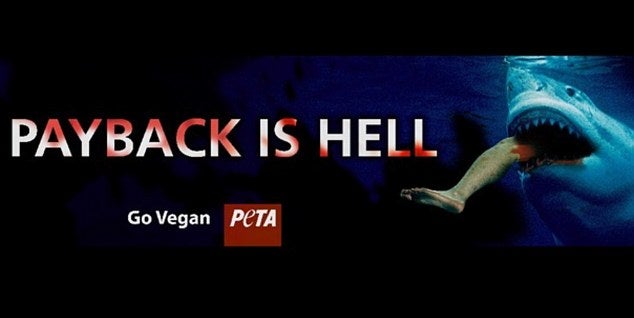 For this week’s taste of PETA idiocy, we head to Florida…

Saying that they hope it will make people rethink fishing, PETA is planning a new billboard ad campaign implying that shark-attack victims deserve their fate. The gruesome ad depicts a shark with a bloodied human leg coming out of its mouth and a startling slogan: “Payback Is Hell. Go Vegan.”

PETA was hoping to place the ad on billboards and benches on Anna Maria Island in Florida and other areas where shark attacks have recently taken place. Charles Wickersham, 21, was mauled by a bull shark while spear-fishing on Saturday. He was pulled to safety by six of his friends and remains hospitalized with bite wounds on his thigh.

“We are certainly glad the man is going to be alright,” said PETA activist Ashely Byrne, “but we hope he and other fishermen will use this as an opportunity to rethink fishing.”

Thus far, PETA has not been able to find an outdoor advertising company willing to place the ad.

“If I see one of those billboards that they plan on putting up, I will burn it down,” angler Bill Goldschmitt told a local Florida television station.