How to Remove a Hook…From Your Chin

One second I was fishing and the next a Zara Spook was hanging from my jaw line by a treble hook slammed to the bend of the hook. 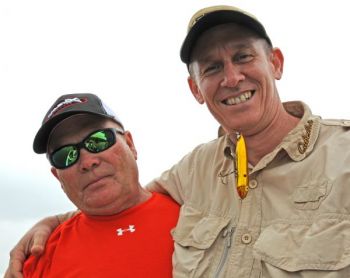 The absolute highlight of the past 5 Octobers has been an event called “Marsh Madness.” Each fall outdoor writers, outdoor industry professionals and a bevy of other awesome individuals descend on Venice, Louisiana to catch redfish, speckled trout, cobia and anything else the Gulf has to offer. There are, of course, more shared laughs and tall tales than there every could be fish which brings us to my buddy Andy Crawford (he’s on the right in this photo; Clyde Pritchard is on the left). I think I’d be better off letting Andy tell the story of exactly how that yellow Zara Spook attached itself to his chin.–Gerry Bethge

One second I was fishing and the next a Zara Spook was hanging from my jaw line by a treble hook slammed all the way to the bend of the hook. It happened just that fast.

Clyde Pritchard felt terrible about embedding the hook into my face, but honestly it was pretty painless. Of course, the incident mandated some decisions.

“We have to go back and get this taken care of,” Art Cosby IV said after inspecting the wound.

Pritchard agreed, but I wasn’t ready to give in. After all, we were all the way down the Mississippi River south of Venice, so it would take more than an hour just to get back to the marina.

And the redfish were biting. Not a chance I was going to throw in the towel when there wasn’t even any pain.

“Have either one of you ever done the string trick?” I asked.

Cosby admitted he had, so I told him to do whatever necessary to get the hook out of my jaw.

After disassembling the lure, only the treble hook hung from my jaw. Cosby clipped the two exposed hooks from the treble to ensure they didn’t cause any problems.

He rounded up some 50-pound braided line, and I lay on the deck to allow him working room.

Soon the hook was out of my face, and we were back fishing.

Attempts to get Pritchard to video the procedure were unsuccessful, but the steps Cosby were pretty easy to explain.

Obviously, the hook had to be pulled out backwards. The key is that the barb has to be pulled through the same hole made upon entry.

Now, here’s the important part: He placed a finger on the eye of the hook and pressed it firmly down into my jaw to put the hook point in line with the hole.

Of course, the shank of the hook wasn’t lying on my skin but standing away from my jaw line to form an arch.

On the count of three, Cosby pulled as hard as he could.

And the hook came right out with more heavy pressure than pain.

I laughed about how hard he pulled, and Cosby said that’s another critical part of the entire affair.

“You have to pull it hard to make sure it comes out,” he said.

I allowed the wound to bleed a little to help clean it out, and then applied some antibiotic cream from Pritchard’s first-aid kit. Within minutes, I was back fishing.

While Pritchard spent the day apologizing, the simple procedure saved the trip – and we went on to catch a pile of redfish.

I headed for the doctor’s office the next morning for a tetnus shot to ensure complications from the rusty, fish-slimed hook didn’t arise and the incident was over.

So be careful to avoid such an accident, but if a hook is buried past the barb this could save your trip, too!