Bluefin Tuna Sets a Record and Sells for $736K in Japan

A 539-pound bluefin tuna sold for an incredible $736,700 at a renowned Tokyo fish market on Thursday. The fish set... 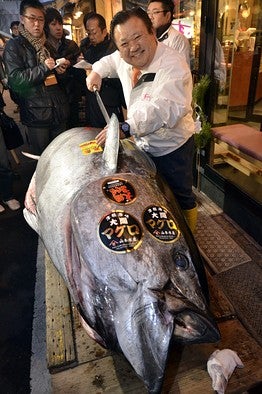 A 539-pound bluefin tuna sold for an incredible $736,700 at a renowned Tokyo fish market on Thursday.

The fish set an all time record of about $1,247 per pound. The fish and the sale was a point of pride among the Japanese.

“Rather than having it taken away overseas, I wish for Japanese people to eat good tuna together. Despite the March 11 earthquake and the sluggish economy I want to lift up Japan’s spirits urging people to work hard together,” Kiyoshi Kimura, the sushi restaurant owner who bought the fish, told the Wall Street Journal.

While the catch serves a temporary boost for Japan’s economy and morale, the global outlook for bluefin tuna populations remains bleak. While populations in the Atlantic seem to be bouncing back, bluefin tuna numbers in the Pacific are dwindling. The problem? Commercial overfishing and an unending demand for sushi in Japan.

In 2010, international trade bans on the species were proposed, but failed to pass the Convention on International Trade in Endangered Species. Both the United States and the European Union supported this ban which would have kept tuna caught commercially in U.S. waters from being sold to Japan.

Currently, Japan consumes 80 percent of the world’s catch of bluefin tuna, according to the New York Times.