Looks like there’s a new tiger trout state record in Utah. This from the Salt Lake Tribune: “Fisheries staff from... 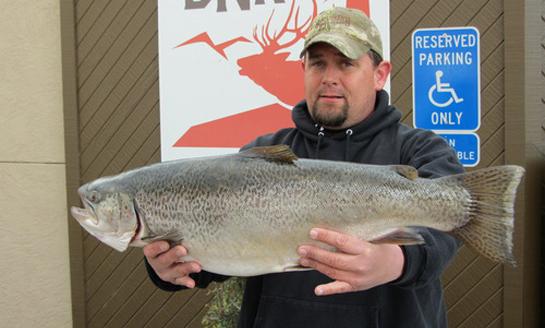 This from the Salt Lake Tribune: “Fisheries staff from the Utah Division of Wildlife Resources are reporting a new state record tiger trout that was landed by Trent Perry of Santaquin on Feb. 16 at Scofield Reservoir. The fish checked in at 32 1/4 inches with a girth of 20 inches and an official weight of 15 pounds and .16 ounces. “

“The previous record tiger trout (a hybrid between a brown and brook trout) was caught in 2007 by Michael Moon at Palisades Reservoir. Moon’s fish was 29 1/2 inches, had a girth of 17 1/8 inches and weighed 10 pounds 12 ounces … The paperwork for the new record has been sent to the Salt Lake offices and just needs to be finalized. Officials report that Perry caught another tiger on the 16th that was about 25 inches long.”