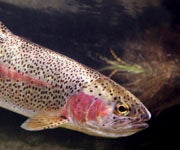 Ph.D.’s know more about the secret lives of gamefish than any fishing pro might hope to.
Outdoor Life sought out some of the biologists whose work is on the leading edge of this revolutionary research. Their startling revelations are guaranteed to make you more successful this season.

The Study
After net-sampling the lakes to tag fish and ascertain overall fish population density, a standardized fishing plan was put into place. Three anglers using similar flyfishing gear and two general patterns were let loose. The first lake (Little Pantano) was fished from a boat for four hours every day for 30 days. Data was collected and trout were released within an hour. The other lakes were fished once a month for two hours.

Lessons Learned
Initially, the catch rate on the most heavily fished lake was high–16 fish a day for the first 5 days. However, the rate declined rapidly to about 5 fish per day by day 15.

What It All Means
We can’t do much about fishing pressure, but a one-sentence note in the published study reveals a simple tactic anglers can use when doing battle with “smart” fish: change flies.

“Presumably we could have continued to entice strikes if we would have changed to new patterns,” researchers concluded.