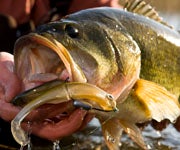 Ph.D.’s know more about the secret lives of gamefish than any fishing pro might hope to. Outdoor Life sought out some of the biologists whose work is on the leading edge of this revolutionary research. Their startling revelations are guaranteed to make you more successful this season.

Legendary bass angler Buck Perry steadfastly believed that any bass would strike any lure so long as it was presented at the proper depth and speed in the right color.

“Their brain is smaller than a pea, and no fish has ever had an original thought,” said Perry.

With all due respect to the old Spoonplugger–not so fast.

The Study
In a remarkable investigation spanning more than 20 years, researchers at the University of Illinois seem to have turned Perry’s dictum on its head while also offering something of an explanation as to why fishing success in certain lakes might change from year to year. What they found, in simplest terms, is that some bass are just easier to catch than others, and that the vulnerability trait can be passed on to their offspring. Further, once all the easy fish are caught, only the tougher fish and/or their progeny remain.

The study began in 1975 in Fox Ridge State Park in Charleston, Illinois. Fishing in the control area, Ridge Lake, was carefully regulated. All fish caught were measured, tagged, and released.

“We kept track of all the angling that went on,” said David Philipp, ecology and conservation researcher at the University of Illinois. “Many fish were caught more than once. One fish was caught three times in the first two days and another was caught 16 times in one year.”

After four years, the lake was drained and approximately 1,700 fish were collected–200 of which had never been caught. The bass were then sorted. The 200 were designated as Low Vulnerability (LV) bass and released. Those caught four or more times were designated High Vulnerability (HV) fish and released into different ponds to spawn. The progeny of the two lines were then marked and released into common ponds. This process was repeated for several generations over 20 years.

Lessons Learned
Offspring of HV fish remained easier to catch than the offspring of LV bass, even after generations of breeding.

What It All Means
At the surface, the Fox Ridge study seems intriguing but benign. However, it has the potential to impact bass management throughout the country–and it all comes down to fishing for bedding bass.

Female bass lay the eggs but leave the caregiving to the males, which guard the nest and stay with the offspring for 8 to 10 days after they hatch. If a male happens to be an HV parent, he might easily be taken off the nest site, leaving offspring vulnerable to predators. Meanwhile, nests guarded by LV males, which are better at resisting lures, remain intact–their progeny maturing into fish that are good at resisting baits. That’s how anglers may be unwittingly creating a generation of hard-to-catch bass, as this landmark study makes clear.