Fish Doctors: A Lesson on Walleye Catchability and Size 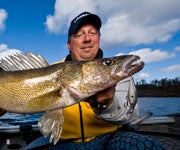 Ph.D.’s know more about the secret lives of gamefish than any fishing pro might hope to. Outdoor Life sought out some of the biologists whose work is on the leading edge of this revolutionary research. Their startling revelations are guaranteed to make you more successful this season.

If you’re into walleyes, two fascinating studies, one from Cornell University and another from Laurentian University in Ontario, contain some intriguing new information.

The Study
The Cornell team, led by Anthony VanDeValk, sought to explain something of a conundrum taking place on New York’s Oneida Lake: Why is walleye catchability seemingly higher in years when walleye populations are lowest? Since 1957, creel surveys and angler interviews have been used to estimate angler catch rates on Oneida. Fishing success ranged from 0.04 fish caught per angler hour in 1957 to 0.47 in 2003. Meanwhile, walleye population density was estimated at 53.7 fish per hectare (about 2.5 acres) in 1957 and 18.5 in 2003. It hardly seemed to make sense, until walleye growth rates were thrown into the equation. Growth rates ranged from 51.6 mm in 1957 to 16.8 in 2003. So exactly what is happening? A fluctuation in the abundance of prey fish held the key.

What It All Means
Although researchers admit that additional information regarding the relationship between anglers, fish, and prey is needed before drawing conclusions with any sort of finality, anglers might well be able to predict their chance for fishing success by gaining information on the relative abundance of prey fish in a particular lake. State fisheries biologists can provide information on prey fish spawning success–offering clues for future fishing success.

They Are What They Eat
Walleyes have eclectic tastes. And some walleye food packs an extra punch. The results of a 10-year study by researchers from Laurentian University indicates that ciscoes are like steroids for wall-hanger fish.

Lessons Learned
According to researchers, data indicated that female walleyes (which are larger than males) had the potential for trophy growth when larger prey–ciscoes–were present. A full 49 percent of the lakes with small ciscoes also featured trophy walleyes.

What It All Means
Doing a bit of homework ahead of time can help you score on a trophy walleye this season. Since ciscoes are critical to trophy walleye growth, start with your state fisheries agency to locate bodies of water with good populations of ciscoes.
“Also, look to larger lakes with lower walleye densities,” says Michael J. Hansen, professor at the University of Wisconsin. “The same is true with muskies.”