Outside of a small fishing village near Havana, Cuba―a seasoned fishing veteran named Santiago battled a giant Marlin for two... 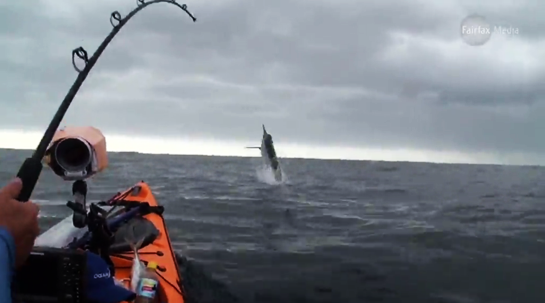 Outside of a small fishing village near Havana, Cuba―a seasoned fishing veteran named Santiago battled a giant Marlin for two days and two nights. By the end of the epic battle, Ernest Hemmingway would be awarded a Pulitzer Prize for Fiction for his novel The Old Man and the Sea. Some seventy years later, the same battle was played out, only this time, it’s on video.

New South Wales policeman Jeff Sheppeard has searched the ocean for 10-years in his kayak, hoping to hook and land a marlin. Earlier this month, his dream came true when he finally hooked and fought this much coveted sport fish.

Over the years Sheppeard has done battle with many big fish from his small boat. He estimates he’s hooked and landed between 50 to 60 sharks. But on this day, he’d hook his dream fish. Sheppeard estimates his marlin to have weighed about 220-pounds. More than enough finned fury to drag the light plastic kayak around the ocean.

The struggle lasted 90-minutes, until the marlin jumped within 30-feet from his kayak, breaking the line. When all was said and done, the fish would go aerial some twenty-three times in this non-fiction thriller.

See the video from theage.com here.