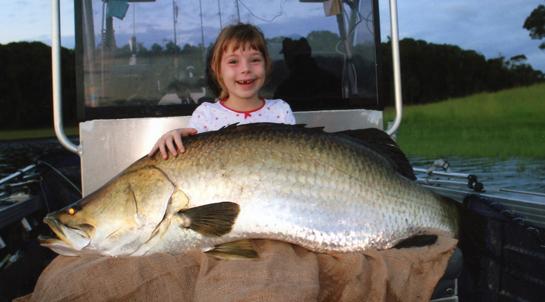 On February 18, a 55-pound, 7-ounce barramundi swallowed bantam angler Charlotte Moller’s live baitfish suspended under a floating cork rig. The little angler that could, was fishing with her parents on Australia’s Lake Tinarro.

She put the fish in its place, boating it in just under 35-minutes. Her “guide” and father, Shane Moller, coached her through the epic battle. When all was said and done, Charlotte had set a new IGFA Smallfry World Record. The previous IGFA record stood at 26 lbs. 14-ounces. IGFA Junior Angler “Smallfry” records are reserved for those fishermen who are 10-years old or younger.

The barramundi is a stout freshwater fish with broad shoulders and a willingness to fight, much like a tarpon. The barramundi is found in tropical and semitropical regions from the Persian Gulf to China, and found as far south as Australia and as far north as India.

Congratulations Charlotte, we’re sure the next world-record fish contemplating giving you “a go” will think twice.