The fishing industry has seen more than its share of phenoms. You know the ones–baits promising to be end-all lures... 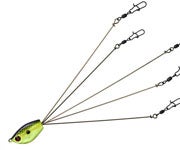 The fishing industry has seen more than its share of phenoms. You know the ones–baits promising to be end-all lures capable of bagging not only more fish, but bigger fish. Rarely, if ever, do these baits live up to their hype.

Case in point. Twenty-years ago, a close bassing buddy called me. He was out of breath and frantic. Through his excited garble, I heard “on TV,” “huge bass” and “only $19.95.” Once he caught his breath and settled down a bit, he explained how he had watched a “TV show” (aka: infomercial) where seemingly pedestrian anglers were boating 10-pounders on nearly every cast. Great news for sure.

My buddy ordered three sets of the “miracle” baits. As he explained, he’d of bought more, but knew he’d be in trouble when his wife saw the credit card statement. Well, you know how this story ends. One day they arrived on his doorstep, like heaven sent manna. He rolled up to my house, a neatly wrapped brown box under his arm and a toothy grin pasted on his face. He wanted me there to witness the unveiling of the messiah-like bass baits.

As he gently peeled back the cellophane, revealing the miracle baits underneath, I struggled to contain my snickers. Well, he fished those baits ad nauseum (that’s Latin for until he couldn’t throw them any longer without fear of rotator cuff surgery) without even as much as a sniff. To this day, on the rare occasion when he’s rubbing in the fact that he’s catching more fish than I―I utter those baits’ hallowed name. At the sound of that name he turns beet red and clams up.

Well, this new-fangled Alabama Rig is promising catches of epic proportion, too. The bait’s premise is simple: a wire harness and snap swivels that allow multiple baits to be fished at one time. OK, makes sense–a school mentality bait.

To get to the bottom of the rig, I talked with fishing industry insider Lawrence Taylor, the Public Relations Manager for PRADCO Fishing. I asked Taylor why the Alabama Rig is such a hot commodity. Taylor said, “Anglers presenting a single lure are going against the grain because baitfish are rarely by themselves―they’re always in some kind of school. Presenting a single lure is not what fish are accustomed to seeing. If we present lures that mimic a school of fish, we’re giving fish a more natural look.”

Taylor continued, “Fish, especially big fish, avoid single lures because they don’t look natural. The multi-lure presentation is so completely different from anything they’ve seen. When they see it, they drop their defenses and strike.”

Taylor gets proof everyday of the effectiveness of this new fishing technique. Since the introduction of the YUMbrella (Yum’s version of the Alabama Rig) he’s been literally flooded with pictures of giant fish regular folks are catching routinely on his new rig.

“Almost every day I receive another photo or story of giant bass caught on our YUMbrella rig. I got a picture the other day sent by Lance Walker of his 14.58-pound Pickwick Lake monster largemouth. A couple days later another guy caught an 11-plus pound bass from the same area,” he said.

Adding to the fervor, Pro Paul Elias won a Pro event of Lake Guntersville recently using an Alabama Rig. Since then, BASS has outlawed the use of this rig in sanctioned BASS events. By doing so, BASS has fueled the fire and built on this rig’s rapid rise in the bass world to near-legend status. All in a few short months.

Like many overnight fishing sensations, the Alabama Rig will be judged by its success over the long haul. But for now, it’s the hottest bait, ahem―”baits” on the water. ($14.99)