The blogosphere has been abuzz with record yellowfin tuna news all spring. And the latest is a post from Phil... 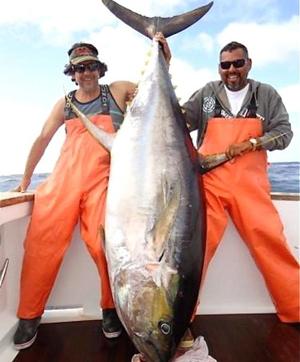 The blogosphere has been abuzz with record yellowfin tuna news all spring. And the latest is a post from Phil Friedman Outdoors reporting a 427.9-pound goliath caught last week off the coast of Puerto Vallarta.

The fish, caught by Robert Pedigo, is a good 20 pounds heavier than the current yellowfin record, but it won’t qualify with the IGFA because another fisherman touched the rod while Pedigo was fighting the fish.

This from Friedman Outdoors…

_”‘Yes, this fish is not going to be a world record because I touched the rod while Robert (Pedrigo) fought the fish,” said Danny Osuna. “We never thought this fish was going to go over 400-pounds.’

When asked how he felt about the giant tuna not qualifying for a new world record, Osuna was upbeat. ‘We are fine with it. The best feeling we have is that we caught the biggest yellowfin ever on rod and reel.’ “_