Numbers intrigue me. I’m told the earth is 93 million miles from the sun. Now that’s a big number. However,... 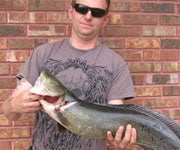 Numbers intrigue me. I’m told the earth is 93 million miles from the sun. Now that’s a big number. However, it pales in comparison to our national debt of more than $15 trillion. I have a buddy who has been married fives times (twice to the same woman). It turns out a baker’s “dozen” is really 13.

Sometimes, numbers escape folks — not everyone is a “mathlete.” Two Missouri bowfishermen had a close brush with mathematics in March. Ben Fraley and David Warren, both of Sikeston, were bowfishing at the Missouri Duck Creek Conservation Area when they managed to arrow two state-record bowfins just minutes apart.

Now they were faced with a quandary: Two bowfishermen, two record-book bottom dwellers and only one spot in the Missouri record books (keep in mind there are 31 days in March). Well, the boys decided to give conservation agent Mic Plunkett a call to get verification for Warren’s bounty. When all was said and done, it was indeed the new state record.

Fisheries Programs Specialist Andrew Branson, who supervises Missouri’s fishing records, said Fraley’s fish would have qualified for a state record if it eclipsed the existing record.

“If they both caught fish larger than the existing record and Mr. Fraley had submitted his fish before Warren’s, it could have been a record,” Branson said. “He still has the satisfaction of knowing he caught a very large bowfin.”

Great. Fraley was saddled with the consolation prize. He caught the wedding bouquet — always a bridesmaid, never the bride.

Now let’s revisit those 31 days. Imagine they arrowed the fish on March 20. Say they hypothetically froze Warren’s fish for seven days and submitted Fraley’s fish first (it was shot first). Fraley’s fish would have been certified as “numero uno” (that’s Spanish for “number 1”). And let’s say they register Warren’s fish seven days after that. Fraley’s record would already be registered and Warren would have the new record.