For 2012, Heddon has redesigned the Zara Spook to create the Chug’n Spook. The Zara Spook has been a mainstay... 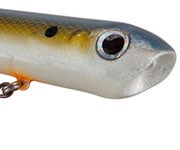 For 2012, Heddon has redesigned the Zara Spook to create the Chug’n Spook. The Zara Spook has been a mainstay of fishermen everywhere for decades. It’s safe to say that literally millions of fish have fallen to the bait’s mesmerizing cadence as it “walks-the-dog.” Fishermen blessed with the ability to rhythmically slosh and slurp this topwater bait are guaranteed crowded live wells and heavy stringers.

Now don’t panic about the new design. It still has the familiar cigar-shaped body. However, Heddon added a scooped-out nose to add a bit of spitting action to the Spook’s already deadly side-to-side saunter. The folks at Heddon all but guarantee more frenzied top-water action.

I personally think this will be a great go-to bait when the bite turns to topwater and traditional floaters don’t trigger strikes. The addition of the spitting action will coax plug-weary fish into a nibble when all else fails. And the “One Knocker” rattle adds a loud audible dinner bell that promises to bring fish up for a taste.

Sticky-sharp XCalibur trebles ensure solid hookups and the saltwater version is equipped with salt-resistant 2X hooks. The Chug’n Spook is available in 26 fish-tempting patterns and retails for $6.99.

A History Note for Tackle Nerds: Heddon’s original Zara Spook was introduced to fishermen in 1939. The first spook was crafted from wooden and called the Zaragossa 6500. It was later mass-produced through an injection-molding process in plastic. With a new manufacturing process came a new name: the “Zara Spook.” Legend has it that the “Spook” was added to denote it was made of plastic.