How to Stop the Snakeheads: Eat’em

I have a recurring nightmare that’s haunted me since I was a knee-high toddler. In my dream, I’m naked, bouncing... 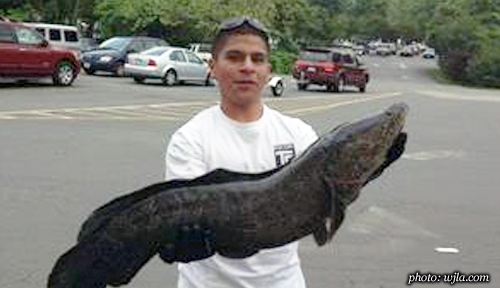 I have a recurring nightmare that’s haunted me since I was a knee-high toddler. In my dream, I’m naked, bouncing on a trampoline in the middle of a Super Bowl halftime show. Half-fish, half-snake creatures surround me, snarling and snapping their bloody teeth. Sound crazy? Well, maybe not.

If you haven’t heard by now, a Woodbridge, Maryland man caught what locals call the “Frankenfish.” The slimy, aberration of nature was pulled from a tributary of the Potomac in Washington, DC. It seems this fish, a northern “snakehead,” may be a pending world record. The grotesque monster, half-fish/half-snake (sounds familiar?), all teeth–weighed in at 18-pounds. The current snakehead record was set in Japan and stands at 17-pounds, 4-ounces.

Potomac fishing guide Captain Steve Chaconas, went mano-a-mano with one of these serpent-fanged creatures and luckily lived to tell about the epic struggle. “I caught a 14-pounder just a few weeks ago,” Chaconas told wtop.com. “And I thought that was big” (sounds mighty big to me too Capt.).

Local fishing lore has it that the invasive snakehead species slithered into the Potomac about a decade ago. Capt. Chaconas recently made a chilling and possibly prophetic observation about the freakish, “They’re getting bigger and bigger…” Hum, couldn’t have said it better myself Captain Obvious.

Although he’s a bass guide, Chaconas regularly fishes for snakeheads with biologist John Odenkirk of the Virginia Department of Game and Inland Fisheries. This, in an effort to inventory these aqua-mutants. Odenkirk admits the Potomac is now home to snakeheads (sounds like someone is flaunting his college degree). His solution is a simple one. Odenkirk says fishermen who catch snakeheads, should “eat ’em.”

I seem to recall when the salty Captain Quint thought he could just “catch” Jaws. Can anyone say Captain Chum? The Woodbridge half-fish, half-snake will be considered for the record books soon. Until then, sweet dreams.