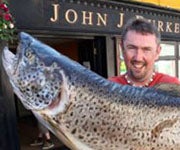 Jones, a big fish specialist, was trolling a Roach brand dead bait; one that resembles a freshwater wild shiner. Jones said he thought he’d “hooked a car” when he tied into the 23-pound, 12-ounce fish.

Jones has special plans for his fish: “I’m having it stuffed,” he told the [Irish media](/node/1001355641/I’m having it stuffed,), and it will hang at his favorite pub, Burke’s Bar, in the village of Clonbur on the Galway-Mayo border. While the fish is a giant in its own right, we can only imagine how much bigger it will appear to Burke’s blurry-eyed patrons. Well, we toast your accomplishment.