Sunday is Father’s Day. Unfortunately, I won’t be able to spend it fishing with the man who taught me to... 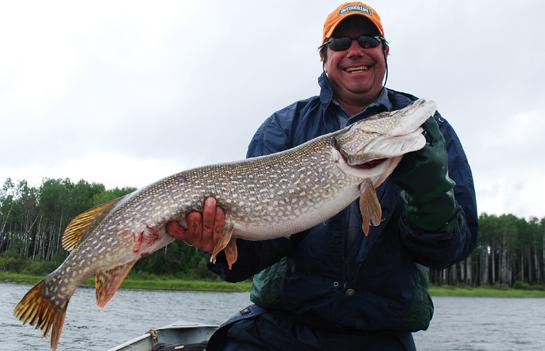 Sunday is Father’s Day. Unfortunately, I won’t be able to spend it fishing with the man who taught me to love the outdoors, but at least I can reminisce about a time last summer when we did go fishing together…

We had yet to catch a big pike. The Robinson clan had driven 200 miles north of the U.S. border to Red Lake, Ontario. From there we hopped on a plane to an indian reservation 100 more miles north and then rode in a pair of float planes 40 miles west to an abandoned lake in the 1.5 million-acre Opasquia Provincial Park. We fried walleye shore lunches, explored waterfalls, chased bears out of our camp and fished from dawn until dusk. But by the fourth day, nobody in our group of six had landed a northern pike longer than 40 inches.

On the morning of our fifth day, with my dad in the bow, I steered our boat out across the lake to a pinkie-shaped bay that was footed with a large weedbed. When I killed the motor, low, grey clouds were already creeping in, but then my fishing partner had never been bothered by the rain.

There wasn’t a lot to talk about as we let the breeze push us to the back corner of the bay. We hurled bucktails with heavy baitcasting rods just like we had done the day before and the day before that.

“I know there are big fish in here.”

“Maybe this shot of cool weather will turn them on.”

It did. From the sound of the straining rod and the whining drag I could tell my dad had set into a good fish. But before I could turn to watch the action, my bucktail blade disappeared in a long flash of silver.

I struck the fish hard and held on as he peeled line. “I’ve got a good one too,” through strained breath.

Anyone who has fought a big pike or muskie can appreciate the chaos they induce among otherwise level-headed anglers. On even the tightest of ships, rods get stepped on, tackle boxes get spilled open, razor-sharp treble hooks get flung haphazardly from starboard to port.

Two of these monsters hooked at the same time was almost more excitement than our little boat, a boat with only one net mind you, could contain.

Through the panic we each worked our fish in. Without a word, we knew the deal, the bigger fish gets the net. When I saw the head and shoulders on my dad’s pike I knew I would be the netman. Rod in left hand, net in right, I took a swipe at my dad’s fish, only one hook wedged precariously in the corner of his mouth.

The fish slid halfway into the net and then spit the hook. I dove forward to catch him, nearly flipping our boat, and the big pike kicked into the net. I passed the net to my dad and went back to my fish. Two more cranks and I had him within reach. I grabbed the leader, foolishly hoping to wrestle him in by hand, but with an angry shake he cut loose and disappeared.

We snapped a few photos, released my dad’s 41-inch pike, shook hands, slapped backs and then sat in the boat and laughed out loud as the rain began to fall.