David Sikes of the Corpus Christi Caller has uncovered a classic fish story from the 1970’s that’s worth checking out.... 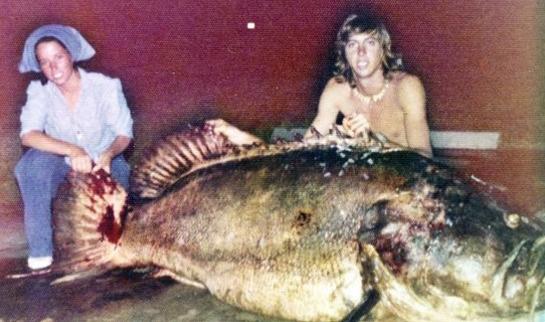 David Sikes of the Corpus Christi Caller has uncovered a classic fish story from the 1970’s that’s worth checking out.

The story revolves around a massive Goliath grouper that attempted to eat then 25-year-old spearfisherman Steve Withers.

_” ‘He was so big he looked like the bottom,” said Withers’ diving partner John Beard. “He raised up and I got the hell out of there. I ran around the pipe and got Steve. As we came around we headed toward the bottom beside the fish.’

That’s when the Goliath turned, opened its gaping maw and engulf part of Withers, head first.

‘He just inhaled him,’ Beard told the reporter.

Silt and sand stirred from the bottom by the strike clouded Beard’s view of what happened next. Unable to see and therefore unable to help, Beard ascended to the boat, where the wives of the two divers awaited. Beard was prepared to proclaim Withers a lost diver when he spotted his partner bleeding and sitting on the stern nursing his wounds.”_

After this story was reported to local news outlets, another young spearfisherman named Brian Gulley set out to catch the man-eating Goliath grouper. A few days later Gulley and his dad found monster fish.

Here’s the report from the Caller …

_”The big-eyed grouper backed up and maneuvered slowly to one side of a motionless Gulley.

Gully pivoted, aimed and fired in a single motion, plunging the barbed projectile deeply between the fish’s eye and gill plate. In a blur, the powerful jewfish turned and bolted.

‘He jerked me out of my fins,’ Gulley said. ‘And he circled around the pipe I don’t know how many times with me hanging on. It was 20 minutes of pure rodeo.’

The fish measured 7-foot-4. It was six feet in circumference.”_

Gulley’s fish had an estimated weight of about 650 pounds. He was sure it was the same fish that attacked Withers. But after seeing the fish, Withers said the grouper that attacked him was even bigger.

If you’re curious, the world record Goliath grouper weighs in at 680 pounds and was caught off Fernandina Beach, Florida. Swim carefully folks.