This goes out to all the righties: Have you ever tried to throw a football with your left hand? Miserable... 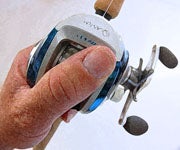 This goes out to all the righties: Have you ever tried to throw a football with your left hand? Miserable isn’t it? To the casual observer, you look like you’ve been jabbed in the neck with a Novocain-laden syringe. It’s like trying to swat no-see-ums with a waterlogged canoe paddle in your mouth.

So why is it folks insist on trying to throw finesse baits — those whose effectiveness is predicated on their precision presentation — on a baitcaster? On any given Saturday, you’ll see ’em out there slinging itty-biddy baits on baitcasting gear. Now look, admittedly it’s not our fault. Reel manufacturers have promoted this behavior ad nauseum (translates from some really, really dusty old language into English as “until you puke”) for decades.

You’ve seen the commercials — a deep-voiced announcer over-articulates, “the all-new, super-duper greatly improved, much better than ever before, Bassvitralos Quadraicic 43,014 ZXTZ baitcaster will blast 1/16-ounce morsel baits into hurricane force headwinds without blinking.” Meanwhile, a screeching electric guitar playing in the background goes through a crescendo as a pro yanks a fatty from the water and hoists it well over his head like Olympic Gold. Wow — that’s incredible! I have trouble throwing 5/8-ounce baits with the wind on calm days (figure that one out).

Baitcasters are built to be held with the left hand and wound with the right. For many of us, our left hand grew up riding the short yellow bus. That means our “less than coordinated” hand is left (no pun intended) to manipulate the rod — as in apply the perfect fish catching twitch or the “have ’em jumping in the boat bait cadence.” It’s horribly unnatural.

Try switching up the next time out. Whenever you can throw bait on a spinning rod, do it. Spinning gear puts the rod in your educated and coordinated hand. You’ll be amazed at how many more strikes you get. And rest assured, it isn’t anything mystical or magical; you’re just now working the baits with a livelier, crisper and cleaner action. You’ll feel the difference yourself; it’s like experiencing a fishing renaissance, an awakening.

Hum, now that I think about, how many touchdowns would Tom Brady throw leftie? Or how many tournaments would Jack Nicklaus have bagged swinging from the wrong side of the ball?