Louisiana Delta: Why I Love Fishing the Marsh

In 2009 we were looking for a new location to conduct the annual Outdoor Life Fishing Tackle Test. Deputy Editor... 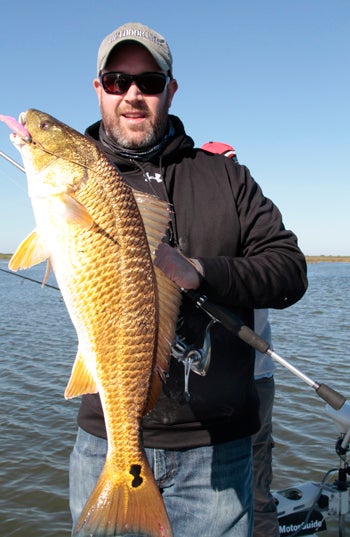 In 2009 we were looking for a new location to conduct the annual Outdoor Life Fishing Tackle Test. Deputy Editor Gerry Bethge suggested we headquarter at Captain Ryan Lambert’s Cajun Fishing Adventures in Buras, Louisiana, and test the new rods and reels against the sea trout, largemouths and giant redfish that occupy the marshes of southern Louisiana at the mouth of the Mississippi River.

Gerry had been to the area a number of times and couldn’t speak highly enough of the fishing. After completing our last three Tackle Tests there, I can’t imagine ever doing it anywhere else.

For one, in order to properly get a feel for how the new rods and reels will perform on fish, it’s important to, you know, actually catch fish. While every fisherman knows that catching fish on any given day in any body of water is never a guarantee, it is as close to a slam-dunk in the marshes as anywhere I’ve ever fished.

For three days, six of us go out in two boats and if we’re not unloading two coolers full of fish back at the dock at the end of the day, then something has gone horribly wrong. For the most part we target the reds, which, pound for pound, are one of the strongest, best fighting species in the world. While we primarily test bass tackle, the reds are the ultimate opponent for the rods and reels in terms of understanding how well they’ll hold up in the hands of largemouth fishermen.

Another reason southern Louisiana is the ideal destination is the solitude we have, both on the water and off. Capt. Lambert’s guides know the channels and ponds of the marsh like the backs of their hands and we rarely see another fishing boat during our test. Part of the charm of Buras, Venice, and the other small outposts at the end of Highway 23 is that they are literally at the end of the road, and unlike other Exit 0s that feature great fishing, like Key West and Montauk, there isn’t much else to do down there except fish (or go work on an oil or gas rig). Outside of the occasional (okay, maybe more than occasional) run to Iguana’s frozen daiquiri drive-thru, when we’re not on the water we’re back at CFA’s comfortable lodge pouring over our notes and evaluating the rods and reels in peace and quiet without a lot of distractions.

I can’t wait to get back down there this fall.