The Rex-Rip: A New Take on the Frog Bait

I’ve seen my fair share of lures with over forty-five plus years on the water (and on the bank). For... 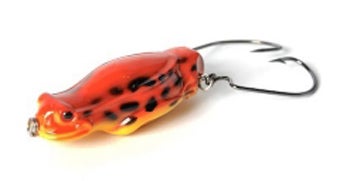 I’ve seen my fair share of lures with over forty-five plus years on the water (and on the bank). For the most part, I’ve got a pretty good sense about what will work and what won’t. When I first saw the Revere Maxx-Fishing Rex-Rip I wasn’t enthused.

My introduction came at the annual iCAST fishing trade show where hesitantly I took a couple samples and threw them in my bag. Admittedly, I wasn’t expecting a whole lot. The two hard and fast rules in lure design dictating baits that consistently catch fish are: aesthetic attractiveness (they look good); and they follow a conventional design theme (deviating too far from center rarely pays off, either on the water or at the cash register).

Recently I gave the bait a go on a small lake in Florida, one I’d grown up on. The fishing there is steady–plenty of fish, but rarely, and I do mean rarely, will you outsmart one over three. After worming a few into the boat, the day was drawing down. I remembered I had yet to try my funny looking hard frog. My plan was to give it a few tosses; get a feel for its action, then dry dock it in a tackle tray for extended storage.

Now the Rex-Rip is ugly. It looks like it should have a bolt through its neck. The hard plastic frog, with its dangling twin worm hooks (where the legs should be) looks like something that would hop out of Sigourney Weaver’s chest in a science fiction thriller. You get the point.

I threaded a couple curly tail grubs on weedlessly, postulating they would make good prosthesis’s for the afore-mentioned missing legs. After rigging, I tied it on to braid and a heavy-action casting rod and went looking for the sloppiest-slop I could find. On my first cast I noticed how great the bait cast. I’d say it “cast like a bullet,” but I hate using cliches. So suffice to say it cast like a hard plastic frog, shaped like a bullet. On retrieve, the tails churn and the frog saunters through the slop like, well, a real-life amphibian.

I caught several fish on my new hard hopper, including one that might have pushed 4-½ on a good day. As is sometimes the case, I can say my first impression of this bait was wrong. Additionally, I can say this bait works because it isn’t aesthetically attractive; and it deviates wildly from conventional design. Go figure.