Erin Wilkinson, a grad student at the University of New England, is breaking new ground by examining the relationship between... 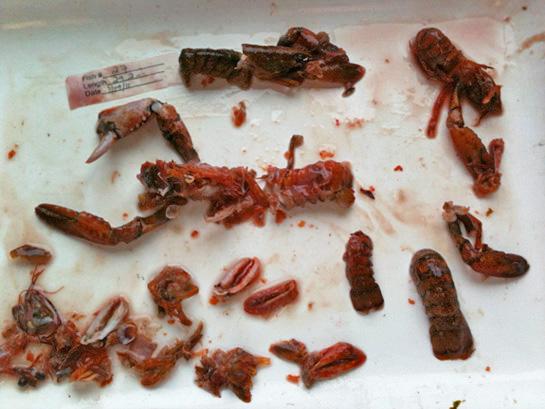 Erin Wilkinson, a grad student at the University of New England, is breaking new ground by examining the relationship between striped bass and lobsters in the Southwest region of the Gulf of Maine.

The question foremost in her mind: How much stress will the increase in striped bass put on local lobster populations?

In her experiments, Wilkinson noted that predators preyed primarily on juvenile lobsters, and the lobsters displayed no defensive behavior toward stripers in particular. She hypothesizes that due to the previously lower number of stripers, lobsters didn’t see them as a large threat. Add these conditions to the lack of other prey for the striper to feed on, and this could mean significant future casualties for the lobster in this region.

Wilkinson’s research project is three fold. It consists of two experiments in the field and one in the lab.

First, Wilkinson set to work collecting and dissecting striper to see what they were eating, how much, when, and what size. She found that only the bigger, older, stripers were munching on lobsters. Logically, only the larger stripers could tackle larger lobsters.

Wilkinson then set up a tether experiment, in which she leashed lobsters of varying sizes and maturity to a line on the ocean floor. When she came back after leaving them vulnerable, she was able to tell which size lobster the predators preferred. (Picture the goat in Jurassic Park.)

For the next piece of the puzzle, Wilkinson teamed up with local lobstermen to obtain live juvenile lobsters (the ones the predators found more desirable) and study their reactions to predators. In addition to striped bass, she put juvenile lobsters in separate tanks with cod and sea raven. While the lobsters showed defensive behavior, such as hiding under rocks, when they encountered the cod and sea raven, they showed no defensive behavior in the tank with the striper.

Although the striper population has officially been recovered since 1995, their numbers have still increased significantly since then. According to Wilkinson, the lack of research on their interactions with lobster leaves us in the dark about what the effects of their growing numbers have been from then until now.

A difference can be seen right now, however, between the lobster catch numbers in this region, and the record catch numbers the Northeastern region of the gulf is currently experiencing.

Coincidence? Maybe not. Populations of predators, including striped bass, are much more abundant in the southwest around Southern Maine, New Hampshire and Massachusetts. That means that where striper numbers are high, lobster numbers aren’t and vice versa.

It’s important to remember that Wilkinson is essentially pioneering the research on this relationship in the area, but her early findings provoke a lot of important questions about the future management of both species. She is now preparing to defend her thesis this coming fall.