_UPDATE: “I am just coming up from Venice. They are letting people ride on the levee. The destruction from just... 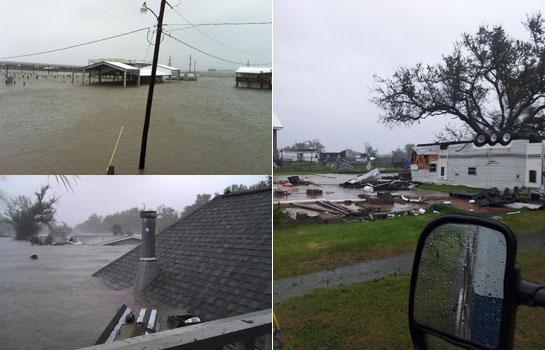 _UPDATE: “I am just coming up from Venice. They are letting people ride on the levee.
The destruction from just south of the refinery to woodland is just like Katrina. There are tons of trash and dead cows/horses everywhere…

Lighthouse looks fine. I didn’t think to look at the villas but I will tomorrow or next day. My place did not do as bad as I expected. Back porch ripped off and some roof gone. Today we patched roof as best we could an jacked up an reattached porch. Going back up to get supply’s now.

Cell phone service working again down here. Marina doesn’t look bad. Lots of sunk stuff. They are catching a bunch of redfish in the marina. And I mean a bunch! “
_–Captain Peace Marvel

_”Our power pooted out about 12:30 a.m. on Wednesday, so I spent the early hours of the day pulling out the generator and back-feeding the house so we would at least have lights and ceiling fans. And I hooked up a portable air conditioning unit in our bedroom, so we could sleep without sweating.

Isaac has been amazing. We were expecting a bit of rain and some gusts, but nothing of note. What we got was LOTS of rain and persistent winds that knocked out power to almost half the population of the state. And it was just a Cat 1 storm. Of course, if it would have blown through quickly, the damage would have been minimal.

One of the most-disconcerting aspects of the storm was that our cell service all but collapsed. None of us could even text with any regularity yesterday. Yes, I know that’s how it used to be before cell phones were so prevalent, but it still made for a long day not knowing what was going on (we disconnected our landline last year).

Even though we are still waiting on power to be restored, I feel I have a lifeline in my accessibility to information through the Web, email and — finally — cell phone. We have four magazines to put together in the next couple of weeks, but there remains no power at the office, so I’ll start collecting as much information about the storm and it’s impacts to the Louisiana coast for our Web and magazine coverage.

It’s going to be a long few days while everything gets sorted out.
–Andy Crawford, Louisianasportsman.com
_

_”Jared and I will be headed out in the boat as soon as it’s safe to do so (probably two days). We’ll be looking to evaluate marsh conditions southeast of New Orleans down into lower Plaquemines Parish. Of particular interest will be the status of aquatic vegetation in the duck ponds. With all of the flooding, high winds and inundation of salt water, we expect to see a massive reduction of available feed as we approach the opening of Teal season on September 15th. We also have the recreational alligator season that was slated to start on September 8th. It remains to be seen when the season will open. The commercial alligator harvest season has already been pushed back, in anticipation of hazardous conditions and stress on the alligator population.. Another concern involves potential fish kills as we will likely see low dissolved oxygen levels in some back water areas.

Plaquemines parish levees, as reported last night, were experiencing very high water levels which caught some by surprise because of the extremely low level in the river leading up to this storm.

In Baton Rouge, it’s blowing and raining like hell and we’ve got some tornado warnings. Storm is moving very slow, with very strong winds. Not what you want to hear. I told all the ducks and redfish they could evacuate to my house, but for some reason, they don’t like the looks of all the cast iron pots hanging in my kitchen.

_”I live on the same power grid as the major hospital in Jefferson Parish, so we seldom lose power. We were out for weeks after Katrina, but didn’t lose it at all during Gustav. Most of the parish is out, but we still have it.

The most-intense portion of the storm is battering us now, and has been since just before dawn. The storm slowed and wobbled as it made landfall near Grand Isle, and has stalled between Grand Isle and Houma. Residents outside the hurricane-protection levees in lower Plaquemines Parish are once again in their attics awaiting rescue. Fortunately, though, all of the hurricane-protection levees seem to be holding.

We evacuated for Katrina, so I didn’t get to witness the power of that giant as it moved through, but I can’t imagine how things looked then. Isaac was a minimal hurricane according to the National Hurricane Center, but David Camardelle, mayor of the barrier-island town of Grand Isle, said he’s never seen a storm this powerful, and he’s ridden out a bunch of them down in his hometown.

Here in Metairie, we’re getting hit by squalls that are wrapping around the still well-defined eye. We’re on the eastern side of the storm, which is always the worst side. We anglers always tend to overestimate wind strength, so I don’t want to do that, but I’d guess the sustained winds in my neighborhood are in the 40s with gusts in the 70s. That doesn’t sound like much compared to the 100+ we had with Katrina, but it’s an intense visual experience. Tree limbs are rolling down the street, and smaller branches fly horizontally. Several have hit our house and sounded like mortar rounds.

I hate to speculate as to the damage in Venice, but I can’t imagine it’s not extensive. I’ve seen some stills from Highway 23, and many of the power poles are down. I also saw a still of three buildings that looked like they had exploded; perhaps a small tornado swept across them.

The marshes are going to be in rough shape. We suffered 20 years’ worth of erosion during Katrina. I wouldn’t expect this to be THAT bad, but the storm is just sitting here. We’ll see how we look in the next few days. I’ll let you all know what I find.”****
_–Todd Masson, Laspecks.com

_”Shell Beach, which is outside the new seawalls, now looks to be underwater. The NOAA buoy shows water levels have reached 9.72 feet above mean lower low water — or more than 9 feet above the normal tidal range. So Hurricane Isaac’s winds, estimated at 38 knots, have stacked up the waters of Lake Borgne to swamp this little fishing village east of New Orleans. Not sure what’s happening in Delacroix to the south, but this area has some of the best saltwater fishing in Southeast Louisiana.

Meanwhile, more than 6 1/2 feet of water has inundated the marshes at the mouth of the Mississippi River.

Even though Isaac is a shade of its larger cousins like Katrina and Gustav, it’s still packing a punch. And as these waters get sucked out after passing of Isaac, valuable marsh will be eroded.”
–Andy Crawford, Louisianasportsman.com
_

_****”Our beloved Venice is in the eye wall now, and will sustain a direct hit from the storm. Because of the levee protection down there, my guess is that the most significant damage will be from wind rather than water. Wind damage is not good, but it beats water damage any day.

Will update as conditions change — assuming, of course, we have power.”_
–Todd Masson, Laspecks.com

“One of the biggest questions, with so much of the BP oil spill still out [in the Gulf] … is how much of that is going to get re-mobilized and pushed back into the marshes?”
— David Muth, National Wildlife Federation

It was just a month or so ago that the staff of Outdoor Life gathered in Buras, Louisiana to report on one of our country’s greatest, yet most profoundly threatened, fish and wildlife resources (see that coverage: Louisiana Delta: A Paradise Lost).

As a hunting and fishing destination, Southern Louisiana stands alone. It is also this country’s most neglected resource. As we told you then, and as Hurricane Isaac is reaffirming now, Louisiana marshes are disappearing at an alarming rate. It will be several days until a full damage assessment from Isaac can be made–marsh erosion and saltwater intrusion. But as the hurricane is about to make landfall, within only miles of where Hurricane Katrina hit, we can bring some thoughts from our hunting and fishing friends who are down there, bracing for the storm right now…

_”Three days ago, before Tropical Storm Isaac even broke into the Gulf of Mexico, the mood in Southeast Louisiana changed. The projected track was steadily shifting westward, and visions of Hurricanes Katrina and Gustav danced in our heads. Now, the storm has spent two days working its way through the Gulf, defying the expert’s predictions of a steadily building hurricane. Only 75 miles off the Louisiana coast, Isaac finally has ramped up to hurricane status.

For many of us who have weathered many hurricanes and tropical, it’s anticlimactic. Another Katrina? Hardly. Another Gustav? Not likely.

But that doesn’t mean it’s not a significant storm, at least in terms of impacts on a fragile coastline that has been beaten to hell over the past several years. Every storm chews a bit more from the marshes that not only protect hundreds of thousands of people from storm surge but has long served as the breadbasket for the nation’s seafood industry. Sure, other coastal regions produce fish, shrimp, crabs and oysters, but there’s nowhere else like the Louisiana coast.

“And now there will be even less marsh to feed the nation’s premiere fishery. Sad to see.”
–Andy Crawford, Louisianasportsman.com

“I live in a suburb of New Orleans, and the latest track has the storm going right over us. We’re not really concerned about having another Katrina-type event. In fact, many of the citizens here are staying put, determined to ride it out, protect their property and be on site to survey any damage. The thing that makes my heart heaviest in all of this is that our marshes will sustain another severe blow. In 14 years, they’ve been walloped by major hurricanes Georges, Lili, Ivan, Katrina, Rita, Gustav and Ike, and that doesn’t even take into account lesser hurricanes and tropical storms.”
–Todd Masson, Laspecks.com
_

_”So I’ve spent the day watching the development of Tropical Storm (soon to be Hurricane) Isaac, and it looks like it’s focusing down on Southeast Louisiana, with Venice and Grand Isle being the first to take a pounding.

LDWF has closed down coastal wildlife management areas, and Jefferson, Orleans, Plaquemines and St. Charles parishes are under declarations of emergencies.

It’s a shame to see yet another storm bearing down on the coast we love, and the estimated 6- to 12-foot storm surge is almost certainly going to eat away more of the marshes and barrier islands that have suffered so much damage over the past few years.

I will continue posting observations as long as I have power and Internet access: Unfortunately, my Prairieville home looks to be in the direct path of the storm, so it’s uncertain if I will have Internet access past tomorrow._

But we’ll be in action as we can, and look forward to hearing from you. So just log on and comment in this thread to help expand our understanding of what Isaac will mean for our coast and fisheries.”
–Andy Crawford, Louisianasportsman.com

“Need a little north turn to get me out of the eye wall.”
–Ryan Lambert, Cajunfishingadventures.com

“With 9 feet of salt water predicted to intrude the Calumet Cut, how bad will it affect vegetation and ducks on the WMA? Everything east of there will get 9 or more feet.”
–jacomo, Louisianasportsman.com