Bassmaster Editor: Here’s Who Will Win The Classic

The Bassmaster Classic is as big as it gets in the sport of professional angling, all species considered. This year’s... 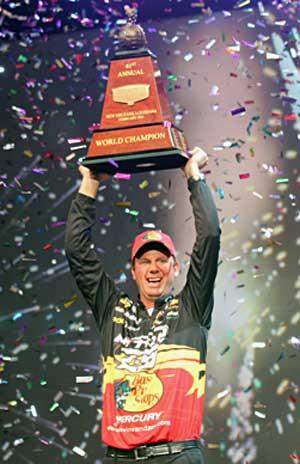 The Bassmaster Classic is as big as it gets in the sport of professional angling, all species considered. This year’s installment kicks off in Tulsa, Oklahoma, (Grand Lake is the playing field) on February 22, with the trophy (along with the $500,000 first place prize) being presented on February 24.

There are 53 competitors this year, and they range from student athletes (Matt Lee will represent Auburn University) to the superstars of the sport (Kevin VanDam will be fishing his 23 consecutive world championship). But of these 53, only one will get the glory. Here is a quick rundown of the guys that most likely will be wearing the next championship ring (yes, Classic Champions get rings much like Superbowl winners … damn, I mean “The Big Game” winners):
**
Jason Christie, Park Hill, Okla.:** This hometown hero has already won the last event B.A.S.S. held on Grand Lake. He fishes it all the time. He is a stud here. That said, local knowledge generally hurts in a tourney of this magnitude.
**
Kevin VanDam, Kalamazoo, Mich.:** Yep, you have to go with the best angler on the planet, who, by the way, has also won on Grand Lake.
**
Edwin Evers, Talala, Okla.:** This guy has been on the cusp of bass fishing greatness for a couple of years now. He has an intimate knowledge of the fishery and has won just about everything but the Classic. This very well could be his year.

Aaron Martens, Leeds, Ala.: Martens is a jerkbait master, and many believe this event will be won on a jerkbait. Not any jerkbait, but a Megabass 120 jerkbait, Martens just so happens to be on the Megabass pro staff.

Check back with the Gone Fishin’ Blog for regular reports on the Bassmaster Classic.