I was fishing in paradise, and, damn, if Rick Ankiel hadn’t gotten into my head. As you may recall, Ankiel... 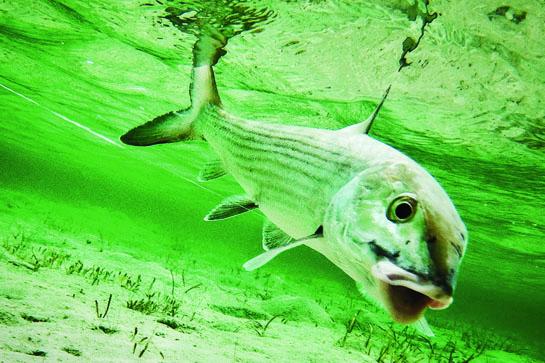 I was fishing in paradise, and, damn, if Rick Ankiel hadn’t gotten into my head. As you may recall, Ankiel was arguably the most impressive Major League pitcher in 2000. However, when he was given the ball in Game 1 of the National League Division Series that year, he launched five of the craziest wild pitches you’ll ever see in your lifetime, walked the bases loaded, and generally couldn’t find the batter’s box, let alone the strike zone. Then he became an outfielder.

I had come to the Bahamas to sight-cast to bonefish–and had the Ankiel yips. As the redneck saying goes, I couldn’t hit the water while standing in a boat.

World’s Best Boneyard
Let me back up a bit. Although I count myself among those anglers who appreciate most anything that pulls hard, I never really understood the collective reverence for bonefish. And then I was invited to join Plano Tackle’s Jesse Simpkins on a trip to Freeport on Grand Bahama Island.

Our base of operations was North Riding Point Club (NRPC) located on 6 acres of pristine beachfront property on the southern shore of Grand Bahama. The Bahama islands have a well-deserved reputation for the best bonefishing in the world, and Grand Bahama Island just might be the best of the best. The north shore of Grand Bahama consists of several hundred square miles of flats, inlets, and mangroves, which make up a huge area of fishing grounds.

The NRPC maintains a fleet of Dolphin flats skiffs that are manned by a group of veteran guides who trailer the boats around the island each morning, the locations based on wind direction. After whiffing on fish after fish on Day 1, I partnered up with fellow editor Jeff Weakley and guide Stephen Tate on Day 2. I had a long way to go to earn my stripes.
“Bonefish, 12 o’clock, 40 feet,” Tate barked. “Cast right in front of their noses.”

I stiff-armed a jig out in front of the lead bone, which miraculously sucked it in and was off like a rocket–first out toward open water before ripping into a forest of mangroves.

“Get out and go in after him,” shouted Weakley.

Before I could even ask him what the hell he was talking about, Weakley was out of the boat, making a beeline for the mangroves through the knee-deep water–with my line in hand. I thought he’d gone crazy.

Unfamiliar with how this game is played, I haltingly plunged in after him, trying to keep tight to the fish. The battle lasted several long and very laughable minutes, with Weakley unwrapping line and fish from the mangroves the entire time. While I should have been embarrassed by my shockingly novice showing, I couldn’t have been happier with that 5-pounder. Keystone Cops? Perhaps. But I couldn’t help but think that’s precisely how bonefish gets in a man’s blood.

Gearing Up
Hard to catch and tougher to land, bonefish are the ideal light-tackle adversary, whether you choose spinning or fly fishing.

1. Rods: Fast-action 7-foot spinning rods capable of casting shrimp a long way. An 8- or 9-weight fly rod is up to the task.
2. Reels: 2500-class spinning reels spooled with 8-pound-test monofilament, and 8- or 9-weight fly reels with a weight-­forward floating taper line are best.
3. Bait: Frozen shrimp pinned to a simple jig is the combo of choice.
4. Flies: Crazy Charlies, Gotchas, Puffs, Bonefish Bitters, or similar crab/shrimp patterns. Bonefish jigs in brown, pink, or yellow get the nod.

For more information on bonefishing, go to northridingpointclub.net.