Fishing Tips: How to Use Stinger and Trailer Hooks

Although manufacturers seem to equip their lures adequately, there are simple adjustments anglers can perform to enhance any bait’s fish-holding... 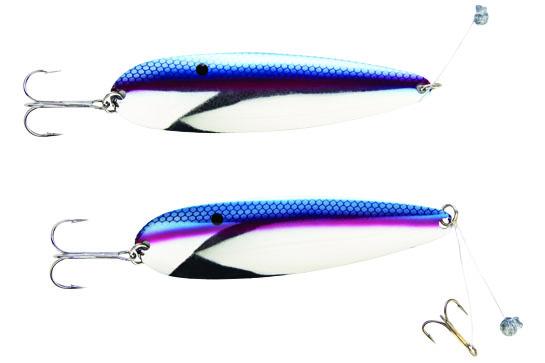 Although manufacturers seem to equip their lures adequately, there are simple adjustments anglers can perform to enhance any bait’s fish-holding power. Hook arrangements for soft-body swimbaits, for example, provide plenty of room for stingers–either the kind that dangle from a lead hook or those attached by a harness. Elsewhere, stingers or trailers prove helpful on flukes, spinnerbaits, and various types of underspin lead heads. Here are four killer rigs to stick those finicky fish that come up and just swipe at a bait.

1. Spoonfeeding
The Pro: Mark Rose, Arkansas
The Rig: Strike King Sexy Spoon with No. 4 treble
The Benefit: The spoon’s 5 ½-inch length and swaying motion creates a dodgy target that even committed fish might miss. Rose fixes this by slipping a treble hook onto his 20-pound fluorocarbon main line before tying to the spoon. Positioning a hook at both ends increases the likelihood of connection regardless of a fish’s aggression or angle of attack, but the free-standing treble adds no weight and, therefore, doesn’t impair the action.

2. Swimbait Bite-Back
The Pro: Brent Ehrler, California
The Rig: Hollow-belly swimbait with trailing treble hook
The Benefit: Fitting his swimbait on a 4/0-6/0 Owner Beast TwistLOCK hook, Ehrler attaches an Owner Stinger Harness to the hook’s eye and pins one arm of a No. 4 or 6 treble in the back. If fish consistently bite from below, he’ll reposition the stinger on the bait’s underside.

3. Fluke Fencing
The Pro: Jason Ober, Pennsylvania
The Rig: Zoom Super Fluke with treble underbelly
The Benefit: Indecisive smallmouths and largemouths often roll and slap at the Fluke, but an exposed treble (sizes 2 to 4) snares the window shoppers when they won’t bite hard enough to get the 3/0 extra-wide gap main hook. In open water, Ober lets the treble dangle from the main hook’s shank with a keeper limiting its backward motion. Over weeds, he’ll pin it to one point in the bait to reduce the risk of snagging. Stinger-rigged flukes catch more small bass, so he’ll pre-fish with stingers to locate fish-holding water and then remove them for big bass.