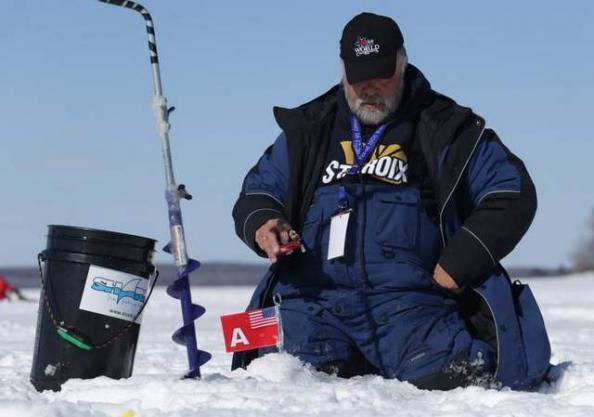 Wausau, WI, Friday, Feb. 15 – It never gets old watching a grown up tough guy start crying while talking about what it means to represent his country in International fishing competition. If you’ve been around top-flight tournament anglers, you know they’re supremely confident, calm, unflappable. Pressure does not typically get to them.

If anybody on Team USA Ice Fishing embodies this, it’s co-captain Myron Gilbert of Brooklyn, MI. But at lunch after Friday’s final practice session, while being asked what it means to him to step onto the ice tomorrow morning for America, tears filled his eyes.

“When we won the first one (team gold, in 2010),” began Gilbert, “you know, I always looked up to Dave Genz, he’s in the freshwater fishing hall of fame for what he did for ice fishing. He’s been an inspiration to me.”
Genz is on hand and participating in team meetings as well, named as the official ambassador for Team USA.

“We sat, before we entered that tournament in 2010,” continued Gilbert, “and I’ll never forget, Dave pulls out of his pocket, a Silver medal. (Genz fished for Team USA in the ’92 World Championships on Lake Simcoe, near Toronto, at which they won silver.) Gets me worked up thinking about it (tears ran down his cheeks, which he wiped away, and it took him time before he could continue).

“He wanted us to see it, and hold it. I’ve fished my whole life, and won national (ice fishing) championships, and I’m happy about that. Thrilled. But there is nothing – nothing – like standing up there on that podium, national anthem playing for your country, as the winners of the gold medal. There’s nothing, in my whole life, and I’ve accomplished a lot, that does that to me.”

In the words of Mike McNett, Team USA Ice Division Director and a former world competitor himself, “pride of country instantly turns on the adrenaline. Each guy goes through his own process, has his own way of preparing himself to compete.”

Once the horn goes and fishing begins at 9 a.m. tomorrow, managing that adrenaline becomes a major key, noted Gilbert.

He told a story on himself, from his first appearance on the world stage in Kazakhstan, where being hyped up almost got the best of him.

“I had four rods pre-rigged and ready to go,” Gilbert remembers, “and in the first half-hour I had three of them all tangled up or busted off. I had to talk to myself, say that ‘you, of all people, know better than this.’ I made myself settle down, and I ended up winning the heat after catching nothing for the first hour and a half.”

After making an appearance at a local Wausau sports show this afternoon, the team will attend a kickoff dinner, then gather for a final night of strategy sessions.