How to Fish for Trout: 4 Tips From the Professor

For 19 years, Joe Humphreys was a professor of flyfishing and angling education at Pennsylvania State University in State College,... 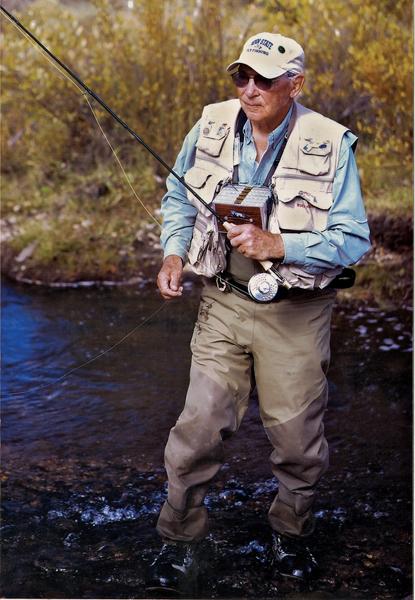 For 19 years, Joe Humphreys was a professor of flyfishing and angling education at Pennsylvania State University in State College, teaching many thousands of college students about “the quiet sport.”

He started flyfishing in 1935, and is now a featured speaker at consumer flyfishing shows around the country. He has also worked with the U.S. angling team’s 14-to-18-year-old division, and fished on the U.S. team during international competitions in Wales, Italy, Ireland, and other locations.

Talking with Humphreys as he enters his 84th year (he retired from Penn State in 1989), it quickly becomes apparent that catching fish, and not simply the aesthetics of flyfishing, is paramount to his enjoyment of the sport. Here are his top four rules for fishing success.

1) Take Stock
When you’re fishing water for the first time, do a little research into the food chain for that particular area for that specific time of year. Use that information to develop your fishing game plan.

“Take a small seine and kick up stones to look for nymphs,” Humphreys says. “Embrace the power of observation. I’m looking for seams, runs, broken water, and lies next to banks. If you don’t see anything on the surface, go down after the fish. Remember that fish also eat other fish, so try streamers, too. Sometimes you have to prospect with a streamer and a long line. Cover water, and once you find fish, then you can switch to nymphs.”

A few favorite fly patterns that Humphreys depends on include the Royal Coachman (“white wings with a tad of red, probably looks like a minnow,” he says), Silver Doctor streamers, sculpins, cress bugs like Hump’s Cress Nymph, freshwater shrimp, Sulphurs (dry and nymphs) like Hump’s Sulphur, and Pheasant-Tail Nymphs and Prince Nymphs, the latter of which he sometimes ties with a flashback on top or uses with a bead head for weight.
**
2) Be One With the Rod**
“I was fishing with George Harvey–the teacher who founded the flyfishing program at Penn State, in 1947–and he was out-fishing me, I guess, three to one,” says Humphreys. “I asked him what he was using, and he told me to forget the fly and to think only about my rod. I was using a 7 ½-foot fly rod; he was using an 8-foot fly rod, which allowed him to drift the fly longer in productive water. That was the difference!”

That memory of learning to use the rod as a tool to keep the fly in good water longer stuck with Humphreys all these decades. He later lobbied Cortland Line Company to make a thin-diameter fly line especially for fishing nymphs. The Deep Nymph Floating Line, as it was called, allowed anglers to keep a nymph down near the bottom of a river, where fish often feed. This was a precursor to Czech Nymphing, a fairly recent long-line, high-stick method of keeping a sub-surface fly down near the bottom on a drag-free drift; Czech Nymphing initially gained popularity in European fishing tournaments and is now used worldwide.

3) Two Flies Are Better Than One
Another formative fishing experience for Humphreys occurred on Spring Creek in Pennsylvania.

“When I was a kid, Spring Creek and its tributaries were the greatest classrooms,” he says. “There was one mile of the stream where you were allowed two fish of 10 inches or better. Called Fisherman’s Paradise, it was stocked a couple of times a week. I tied freshwater shrimp and cress bugs, and I could pick out trout and sight-fish for them [with these flies]. I used a dry-fly and a dropper cress bug and caught a 17-inch fish. It was 1946, and I was a junior in high school.” Humphreys’ suspension system was born. In simple terms, he learned to fish a floating and sinking fly combination, with a long leader to get the sinking fly down. Today, the setup is better known as a dry and a dropper.
**
4) Fish After Dark**
Humphreys has high regard for, as he calls it, “the night game.” He caught a 34-inch state-record trout while fishing after dark, in fact. Aquatic insects hatch at night, he has found, and he’s never without Hump’s Sulphur and Green Drake dry-fly patterns. “I often also work with big wet flies and streamers at night,” he says.