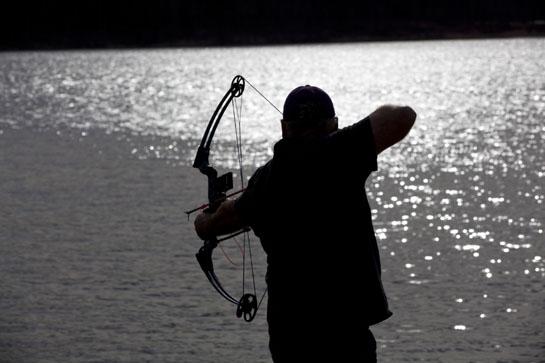 A wide variety of rigs thundered into Branson, MO. They ranged from the outrageous to the oddly sublime. No matter the vessel, or its level of complexity, everyone enjoyed their time on the water.

Participants and spectators were all smiles with plenty of action to keep everyone entertained, both on the water, as well as at the weigh-in.

Legendary superhero Garzilla even found time in his busy schedule to make an appearance.

In traditional Bass Pro style, the event provided a family atmosphere. From start to finish was stellar; the signature of the BPS brand and their incredible network of employees.

From aircraft prop motors, mud bugs, go devils, outboards and even one residential floor fan (admittedly a joke), power plants were as varied as the states represented in the field.

Combatants were well-equipped with string powered heat. Teams came loaded to the gills, ready to battle into the darkness with a foe who lurked in the shadows.

Contrasts in gear selection and preparation were evident among the teams. Generators, who provide essential electricity for the lights, offered a study of the absurdly abstract and the level of creativity bow fishermen possess.

The business end of arrows plenty of bottom dwellers were rudely introduced to during the evening’s festivities. In excess of 18,000 pounds of invasive species were removed from the lake during the tournament.

As the sun rose on the early morning weigh-in, there was evidence of the war out on the water. Teams of crusty characters, armed with boatloads of moxie and sharp arrows rumbled for twelve long hours for a chance to be crowned “King of the Carp.”

When the smoke settled, Darren Freeze and his team earned the big fish award with an incredible 49.6 lb. monster. Bass Pro Shops founder Johnny Morris (second from the left) poses with team members.

2013 King of the Carp. Bass Pro Shops/Tracker Boats US Open Bowfishing champions–team captained by Bill Schupmann. John Paul Morris joins his father on stage for the awards presentation (second from the left).