He won the first Bassmaster Classic in 1971 and repeated in ’78, but Bobby Murray is no one-trick pony. He... 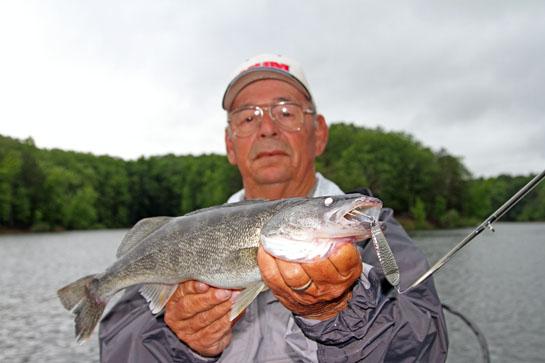 He won the first Bassmaster Classic in 1971 and repeated in ’78, but Bobby Murray is no one-trick pony. He holds a fondness for catching walleyes on his home waters of Arkansas’s Lake Ouachita. Options are many but when ‘eyes suspend over timber, here and in any deep reservoir, Murray said it’s time to spoon-feed the fish – literally.

Favoring ½- and ¾-ounce Cotton Cordell jigging spoons, Murray knows that when bait balls move down the lake, they’ll tarry over the humps, submerged islands, long points, etc. and walleye will leave the timber with appetites ablaze.

“When these fish get ready to feed, they’ll move out of the tree tops in schools,” he says. “That school will feed across that (shallow spot) and they will absolutely hammer a spoon.”

Murray says the spoon’s up-and-down, fluttering motion mimics a wounded baitfish and no self-respecting walleye would turn down such vulnerable prey. Even after the school has had its fill, the walleye’s instinct tells it to eat when food avails, so that dancing spoon typically entices any nearby fish – even those with stuffed bellies.

“I don’t think they’re always trying to eat, but genetically, he can’t pass it up,” he said. “It’s too easy. It’s right in front of him. “

Murray advises anglers to closely monitor their sonar to keep track of the school’s position in the water column. Keeping that spoon in the strike zone is what keeps your rod bent.