Kevin Wolff was having an awesome trip fishing Lac La Matre in the Northwest Territories last month. He landed 24... 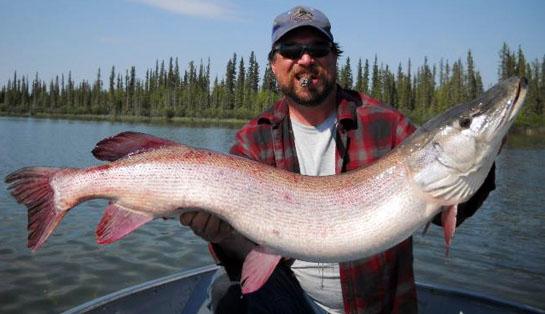 Kevin Wolff was having an awesome trip fishing Lac La Matre in the Northwest Territories last month. He landed 24 pike over 20 pounds and three lake trout over 20 pounds. Then he caught what could have been a world-record fish.

Wolff spotted a huge pike in shallow water and casted a streamer at it. The pike hammered the fly and the fight was on. Wolff brought the fish to the boat and noticed its silver, grayish coloration. It was a 47-inch, 48-pound silver pike, according to jsonline.

Silver pike are extremely rare. They are the same species as northern pike, only a genetic mutation gives them a silver coloring. They can be found throughout the northern pike’s natural range.

The International Game Fish Association does not keep a record for silver pike, but the National Freshwater Fishing Hall of Fame does. Wolff’s fish would have crushed the record by 10 pounds. It would have missed the catch-and-release length record by about one inch, according to jsonline.com.

But Wolff let the fish go, like he does with all big pike.

“I’m a catch-and-release advocate,” Wolff told jsonline.com. “It’s the key to having trophy-sized pike, for sure … I never had any doubt about what would happen with that fish or any other big one I catch … They all go back in the best condition possible.”

Congratulations to Wolff for releasing a once-in-a-lifetime fish.