The Biggest Bass Ever Caught on Lake El Salto

The biggest bass ever caught on Mexico’s Lake El Salto hangs over the bar at Anglers Inn resort. The fish... 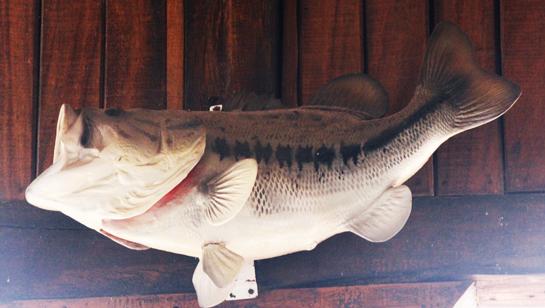 The biggest bass ever caught on Mexico’s Lake El Salto hangs over the bar at Anglers Inn resort. The fish weighed 18.8 pounds and was caught about 8 years ago by an angler from Midland Texas.

“There’s not really much of a story to it,” says Billy Chapman who runs Anglers Inn. “He was fishing down here by the resort and pulled it out of some timber. He wasn’t a big time fisherman, just a normal guy.”

More often than not, that’s the way it goes at El Salto. Ten-pound bass and bigger can be caught anywhere, any time on the lake. And, you don’t have to be an expert angler to catch them.

During my week down there I met an angler who had never fished for bass before in his life. On his third day he flipped a plastic worm up on a rock ledge and let it slide into the lake. Just like that he hooked and landed a 10-pound bass. The fish of a lifetime, and he didn’t even realize it until his buddies explained it for him later. The kicker? The cast before, he accidentally threw his rod into the water and almost lost it.

Anything can happen on a lake where 10 pounders are fairly common and the average bass caught weighs four pounds. The real possibility of any angler catching his or her fish of a lifetime makes El Salto perhaps the best trophy bass lake in the world.

Learn why Lake El Salto is still the spot where you’ll catch your biggest bass ever.