Learn how a bass master reels them in, even in scorching heat 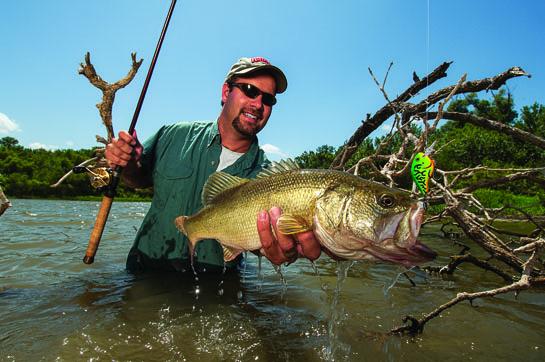 Want to turn on the air conditioning?” Preston Clark asked. It was hotter than two squirrels sweating in a sock, and we were in an uncovered bass boat on Orange Lake in Central Florida. I wondered which one of us was losing it.

While out summer bass fishing on that late-July afternoon, I caught one measly bass. Meanwhile Clark, a guide and pro who holds the record for the largest bass ever caught at the Bassmaster Classic (11 pounds 10 ounces in 2006), had already released two 10-­pounders. The thermometer was defeating me, but he was having a day to die for. Here’s how he did it.

Know Your Bass
“The hotter it gets, the more aggressive bass become,” says Clark. “They burn more fuel, so they need to eat more often. Look for feeding fish near shade, and don’t shy away from shallow areas no matter how shallow. When fishing docks, aim for the darkest, hardest-to-get-to spots. When fishing thick vegetation, use weight to get under the weeds.”

Flip Them Out
In places like Lake Toho in Florida, Clark is punching through thick vegetation. He goes with a 7-foot 11-inch heavy-action rod. Spool up with 65-pound-test braid. Clark likes Bass Assassin’s Jingle Bug (black or blue), Texas-rigged with a 6/0 Strike King Hack Attack Flipping Hook. “The key is to learn to make your bait turn over during your flip so that the point of your weight hits first,” he says. The hook is designed specifically to run in the thickest of bass cover.