They make millions of dollars, drive 200 mph cars, and are addicted to staying beautiful, but at the end of... 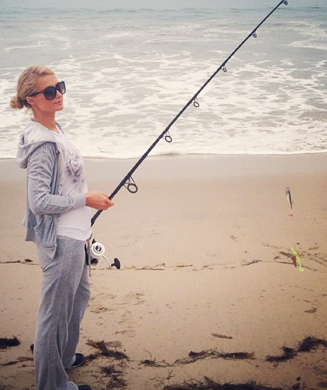 They make millions of dollars, drive 200 mph cars, and are addicted to staying beautiful, but at the end of the day celebrities are not that different than everyone else. For example, a handful of Hollywood stars took time out of their springs and summers to go fishing. What follows is a quick round up of good, bad, and ugly celebrity fishing excursions. The good: famous people having fun and promoting our sport. The bad: famous people not having a clue what they’re doing on the water. The ugly: famous people negatively impacting our sport.

Their experience marked the first time in history that female animal activists got angry at how good a celebrity looked fishing rather than the fact that the celebrity was actually fishing (Christie is 59 years old!)

Victoria Secret Angel and Australian supermodel Miranda Kerr had the best attitude ever when she posted details of her April fishing trip with two-year-old son Flynn on Instagram. Her posts included: “Fishing with Flynn! #funfamilyday,” and ”We didn’t catch a thing but we certainly had fun!”

That’s right Miranda, it doesn’t matter if you catch anything. It’s just being outside as family that matters.

3) The Hilariously Good: Harry Styles (the One Direction kid)

It’s all fun and games until somebody gets a fish hook stuck in his butt.

Then it’s hilarious. Even more so when the unlucky sap happens to be in a boy band.

One Direction’s Harry Styles got tangled in fishing line before setting a hook in his backside while fishing this summer. The event was captured on film and appears as a blooper at the end of the movie “This Is Us.”

I’d almost pay to see that.

Say what you want about Paris Hilton, but the girl likes to fish. The usually fashionable Hilton looked fairly plain Jane during her July fishing trip, but that’s ok with us. Her Instagram description with this photo was: “Love going fishing in Malibu. #TomBoyAtHeart.” How about some actual trophy shots next time?

I’ll give him a pass on the latter as it was written on Facebook. But no pass for the snake, Carl. You’re a great fisherman and you fish all the time. We’re a big fan. Post more fish pics!

Action movie mega-star Sylvester Stallone put aside at least one afternoon while on vacation in the Mediterranean this month to teach his three daughters how to fish.

How’d they do? Well, Sly caught a jellyfish. No word on what his daughters caught.

So who looks better for their age: Sly or Christie Brinkley? Stupid question, I know.

Not only does Russian President Vladimir Putin know how to fish, he knows how to tell a good fish story. After catching a large pike in Siberia in July, the avid outdoorsman bragged about it weighing 46 pounds. Many Russians, and anyone who’s ever caught a pike before, disagreed. Haters posted online that the fish looked much, much smaller.

Those people were never heard from again.

Houston Rockets center Dwight Howard might know how to light up the court but he didn’t seem to grasp the concept of catch-and-release last June when he posed with this a very lengthy tarpon. Dwight, tarpon taste like crap — throw it back.

The 6-foot-11 all-star boasted of his catch on Instagram: “Fish bigger than all us.”

For someone who makes a living under constant reality show surveillance (he’s Bruce Jenner’s son), one would think Brody Jenner would know how not to present himself and his actions in the media.

Oh wait. Maybe he wouldn’t. He’s stepsibling to all those Kardashian gals.

Regardless, Brody’s August Instagram picture of his tuna catch was…Well…His hashtag of “#successfulmission bloodydecks” pretty much sums it up.

We love that you’re eating what you catch (see Jenner’s response to the photo here), but you have to respect the fish, bro. Clean it up before taking a photo.