One of the craziest happenings in the Cape Cod Canal’ s history occurred this month when a local angler landed... 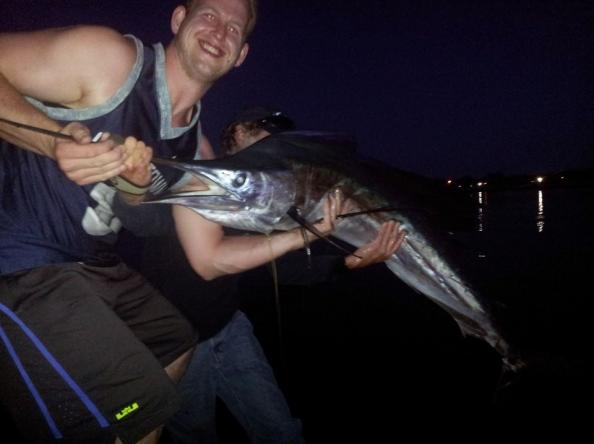 One of the craziest happenings in the Cape Cod Canal’ s history occurred this month when a local angler landed a sailfish in the canal waters.

Justin Sprague had no serious intention of fishing when he pulled out his rod and reel and made a few casts in the canal three weeks ago. He was out on a bike ride. He spotted a tailing sailfish while throwing a rubber bait. Sprague hooked the wildly jumping fish in the canal waters and it took him 45 minutes to land the fish. Sprague’s catch was caught near the Murderer’s Row section of the Cape Cod Canal, according to capecodonline.com. If you still think it’s some BS, here’s the video to prove it. Sprague’s comment when he hooked up was summed up as “Holy (expletive)!” Exactly.

And if that’s not unusual enough, across the pond, one lucky angler found a swordfish in the River Tyne, which is known for its salmon fishing. The broadbill measured 4 feet long and was entangled in a fisherman’s salmon net, the BBC reported. Rob Latimer of Latimer’s Fishmongers in Whitburn surmises the fish was chasing mackerel or salmon down the river.

“It must have fancied a holiday in Whitburn I think – I can’t blame it,” he said.

Swordfish are normally found in the warmer waters of the Mediterranean Sea, not in a salmon river.