The Gift of Cod: Dolphin Catches Fish for Girl

Here’s a fish love story for you. There’s a local dolphin named Dave that lives in the waters of Combe... 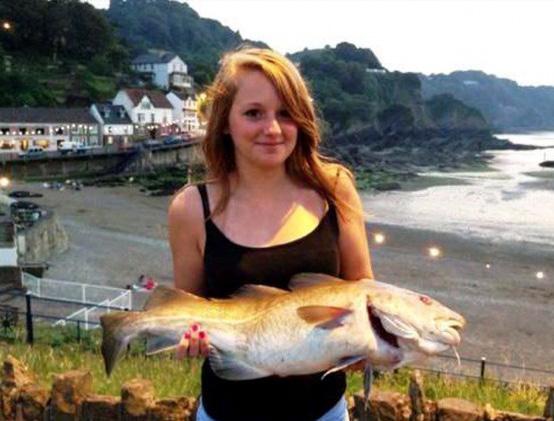 Here’s a fish love story for you. There’s a local dolphin named Dave that lives in the waters of Combe Martin Bay of the coast of Devon, England. There’s a local girl, Lucy Watkins, age 14, who was out kayaking those same aquamarine waters with her grandparents, Nina and Mike, on July 25th.

The Watkins and other locals have known of Dave for years. The mammal, always gregarious and affable, sometimes entertains visitors with his clownish antics. Lucy was paddling around when Dave stopped by to show off some of his aerial antics. With a swish of his tail, he then dove down deep, surfaced with a 10-pound cod between his jaws, and then proceeded to present it to Lucy as a gift.

Lucy told SWNS: “He definitely wanted me to have his fish. He first dropped it 20ft away but then pushed it to within 5ft of my kayak… To have this awesome creature which I had loved since I was little to give me a fish that it would normally have for dinner made me feel on top of the world.”

Originally, Lucy played coy not wanting to accept the gift, but the dolphin nudged it toward her, before submerging again and coming back up to show off his own freshly caught dinner – a sea bass. According to the Daily Mail, Grandma Nina said: “It seemed rude to refuse him so we took the fish and had cod and chips for supper.”